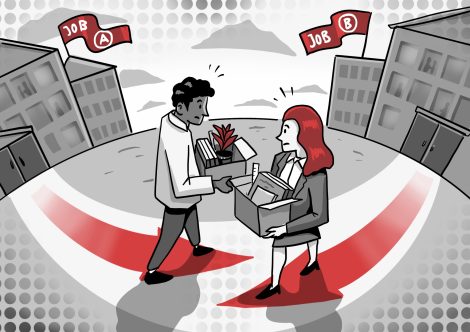 The “Great Resignation” is rolling across the global labor market and is not stopping at Germany. Studies suggest that the most important factor influencing this wave of resignations is corporate culture. Is it all nonsense – or do the findings actually offer an approach to save companies from the tsunami?

In May 2021, American university professor Dr. Anthony Klotz predicted the “Great Resignation.” The business economist coined the term for the economic trend of mass voluntary resignations that is still ongoing. (1, 2) According to a recent study by XING and Forsa, 37 percent of employees in Germany are also thinking about quitting – 12 percent more than in the previous year (XING, 2022). One in four employees is already leaving the company without a new job. Current studies make it clear: Corporate culture is one of the strongest factors influencing the wave of resignations. (4) So could changes in corporate culture prevent the Big Quit?

The prediction of the Great Resignation is based on different assumptions: First, many people who were already planning to quit had not yet done so due to the uncertain labor market at the beginning of the pandemic. On the other hand, job-related burnout was becoming more frequent. Last but not least, there was also the first reliable data from the service industry predicting such a phenomenon. (5) In addition, “the confrontation with illness and death confronts people with existential questions, such as the sense of meaning and how this fits with the current occupation,” according to Anthony Klotz.

To better understand the reasons for the Great Resignation, Sull, Sull, and Zweig (2022) examined 34 million online profiles of U.S. workers who left their companies between April and September 2021. Although there are industry differences in the number of employee turnover at companies, it is notable that blue- and white-collar employees are affected equally. (4) For example, turnover in apparel retailing is the highest at 19 percent, followed closely by turnover in management consulting (16 percent). Below-average turnover can be observed in companies known for their healthy corporate culture. While innovative companies such as SpaceX, Tesla and Nvidia have higher turnover rates than their less buoyant competitors, such as Boeing, Ford and Intel.

The researchers then examined 1.4 million company reviews on the online portal Glassdoor to analyze which issues most concern former employees. They concluded that the salary issue – which is often the focus of coverage around Great Resignation – ranks only sixteenth in predicting a company’s turnover rate. Other factors are significantly more relevant. For example, recognition of employee performance is 2.9 times more important than compensation. So companies that overlook special achievements run the risk of losing their high-performers. Surprisingly, “high innovation” is also a significant predictor of the wave of layoffs (3.2 times more important than compensation). Constantly working on the latest technologies may be exciting and satisfying, but in the long run it also costs stamina in terms of overtime, speed and stress. However, by far the strongest predictor of a company’s turnover in an industry comparison is “toxic corporate culture,” whose characteristics include poor or no communication, failure to honor agreements, or little time for recovery periods: With a predictive power 10.4 times stronger than the issue of “salary”, culture ranks first.

These findings are consistent with other studies that, even shortly before the Corona pandemic, identified company culture as both, the most important predictor of job satisfaction and one of the most important reasons for wanting to stay with the current company. (6, 7). A survey of 2,002 employees and 500 HR decision makers commissioned by software developer Personio in 2021 came to the following conclusion: for 21 percent of employees surveyed, a toxic corporate culture was a key driver of quits during the Corona pandemic. The companies, on the other hand, rate this factor as rather low (12%) and think that issues such as leaves of absence and reduced benefits are decisive. (8) The study’s authors lament the worrisome dissonance between companies’ perceptions of reasons for termination and the reality of employees’ experiences. They call for a better understanding of the employee perspective and call for putting people first.

An unhealthy corporate culture cannot be changed overnight. Some researchers and consultants are currently recommending talking about lateral career opportunities, implementing good home office policies, and creating predictable work schedules to influence some of the key predictors of the quitting wave in the short term. Good ideas. Still, there’s no denying that in the long run, the only way to win the battle for the best talent is to understand and address the cultural elements that drive employees to quit. Now is the time to initiate the great reflection: Social events, whether a teambuilding excursion or shared dinners, are part of a healthy corporate culture. They provide spaces for exchange, strengthen the bond within the team and enable a change of perspective. It is now a matter of asking the right questions, for example, what constitutes a good corporate culture and a good working day for employees. It’s about showing appreciation and respect for employees by taking appropriate action based on the answers. HR managers should also support executives in exemplifying the company’s core values. And not to be neglected: Saying goodbye with grace to those who decide to leave.

1 Bloomberg (2021), Quit Your Job: How to Resign After Covid Pandemic. www.bloomberg.com/news/articles/2021-05-10/quit-your-job-how-to-resign-after-covid-pandemic

5 Kaplan, J. (2021), The psychologist who coined the phrase ‘Great Resignation’ reveals how he saw it coming and where he sees it going.  www.businessinsider.com/why-everyone-is-quitting-great-resignation-psychologist-pandemic-rethink-life-2021-10