Preferably (not) everything at the same time 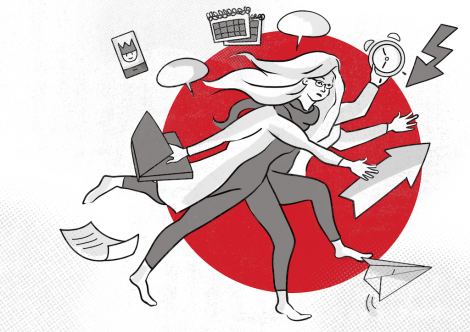 Everyone knows it: The world of work is becoming more complex and fast-moving. More and more people have the feeling that their job tasks are becoming more numerous. The pressure to perform is rising. Increasingly, the question arises of how to withstand acceleration. Many people try to do several things at the same time. Is New Work only possible with multitasking?

Even in our private lives we tend to multitask, watch TV while we play with our mobile phones or chat with others at the same time. People who are capable of multitasking could have an advantage in modern society. But to what extent is such simultaneity possible at all? And, if multitasking is not possible, is the actual supreme discipline simply the speed of switching between tasks?

MIT neuroscientist Earl Miller found that our brains are not very good at multitasking. Working and listening to music on the side may still work. But people can only concentrate on one or at most two complex tasks at the same time. When people think they’re multitasking, they’re actually just quickly switching from one task to another. And they generate cognitive costs in the process (Levitin, 2015). That is an effort which is incurred for the cognitive processing of information and arises because people repeatedly have to think themselves back into the old task, or have to recall details in their memory, in order to think again about what they had actually already discovered (Grether, Schwarz, Wilde, 1986). Multitasking therefore makes it more difficult to structure thoughts and filter out irrelevant information, thereby reducing the efficiency and quality of our work.

The constant change of tasks promotes bad brain habits. When we do a small task (send an email, answer an SMS, or briefly post something on social media), we are fed a small batch of dopamine, our reward hormone. Our brains love this dopamine and so we are encouraged to switch between small mini-tasks that give us instant satisfaction. This creates a dangerous feedback loop that gives us the feeling that we do a lot, while, in reality, we don‘t (or at least nothing that would require a lot of critical thinking).

That the supposed multitasking leads to a drop in performance has also been proven by researchers at Standford University. In their tests, they divided the subjects into two groups: Some were used to frequently switching between media and tasks, others had significantly less multitasking experience (Ophir, Nass,Wagner, 2009). “In situations in which information comes to them from outside from several sources or emerges from memory, the practiced multitaskers cannot filter out what is not or less relevant to their current work,” says Wagner, lecturer in psychology. “This inability to filter means that irrelevant information results in a slowdown.”

Some studies even suggest that “multitasking” reduces intelligence. For example, a study at the University of London showed that subjects who performed multitasking while performing cognitive tasks experienced significant IQ losses. These losses are comparable to what is observed, for example, in people who miss a night’s sleep (Janssen, Gould, Li, Brumby, Cox, 2015).

And not only that: New research suggests that cognitive damage associated with multitasking may be permanent. In a study carried out by the University of Sussex (UK), MRI examinations were carried out on the brains of people who frequently dealinci with several devices at the same time (e.g. television and smartphones). The MRI scans showed that subjects who did multitasking more frequently had a lower brain density in the anterior cingulate cortex. This is the area responsible for empathy and emotional control (Loh, Kanai, 2014). However, it is not possible to say with certainty whether multitasking is responsible for these effects or whether existing brain damage leads to multitasking habits.

Nevertheless, it is advisable to avoid multitasking when it comes to processes that actually require all our attention and are not incidental, such as listening to music. It does not work to do everything at the same time. Over time, multitasking even robs us of important cognitive abilities to solve complex problems.

Grether/Schwarz/Wilde, 1986, The Irrelevance of Information Overload: An Analysis of Search and Disclosure