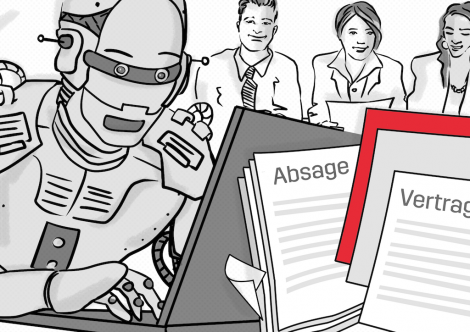 Companies are increasingly relying on algorithms for personnel selection. But apart from all the efficiency, caution is required.

There is hardly any other area in HR that has been changed so much by digitalization as recruiting. Pretty much everything is turned upside down for almost 20 years. Taking a look into the job market of the FAZ is enough to gain an impression: While in 2011 there were almost 16 pages per day of job advertisements on average, by 2015 the figure was just under 2.5.

The recruiting portal has become the interface between companies and applicants by now. In addition to the rapid development of technology in this area, there has also been a change of the requirements for recruiting in recent years: while in 2007, for example, 20 percent of the largest German companies carried out tests as part of the selection procedure, by 2015 there were already three quarters (cf. Hossiep, R., Schecke, J., & Weiß, S.; 2015).

The value proposition of scientifically based test procedures is great for companies. According to DIN 33430, this includes above all:

„• to avoid the two main errors in this area: Hiring the wrong ones and rejecting the right ones,
• to prevent the termination of training insofar as it is the result of a wrong choice…”

Nowadays it can be observed that psychological tests are being increasingly integrated into recruiting portals. Online personality tests promise efficiency and remedy for many problems. This approach is supported by scientific experts such as Daniel Kahneman. For instance, he has made it very clear that people tend to make bad decisions because they do not have a strong statistical mindset (cf. Kahneman, D., 2012) and it is only logical to use technical tools to prevent these bad decisions.

However, what may be right in principle still carries risks:

The result of such an approach is not the promised efficiency (rapidness) and high accuracy of fit, but the opposite and with a high probability injustice. Why is that so?

The most important reasons are:

These arguments alone show that a differentiated approach to the question is required. Especially in VUCA times, competences are in demand that is difficult to identify by standardized test procedures. As an example, customer’s point of view, co-creation, etc. should be mentioned. (cf. Ritz, A., & Thom, N. (Eds.), 2018).

The question arises: What to do if one side demands and promotes standards and the evidence regarding the actual implementation seems to argue against it on the other hand. The solution lies in the type of approach: It is about eye level, empathy and, diplomacy as well as science-based methods (cf. Babka S., 2016; Schuler, H., 2014).

The selection criteria used must be scientifically sound and should not be based on user acceptance as defined by software companies. One possible approach to diplomatic communication is represented by social media channels (cf. Babka p., 2016). Moreover, empathy would be appropriate in the job interview. This requires rethinking: HR is called upon to take its applicants and their company seriously and to protect them from questionable algorithms.