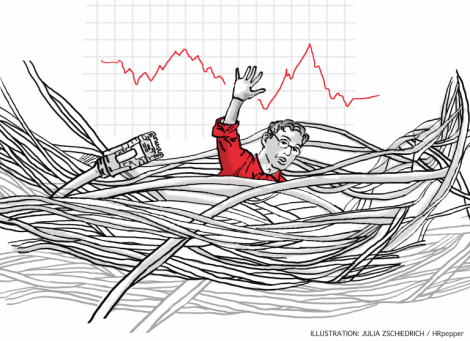 The apprenticeship as a qualified bank officer used to be referred to as the supreme discipline of the commercial training occupations. In the past, it was often the basis for successful careers in the financial services sector or other industries as well. Having successfully completed the apprenticeship, all doors are open to you!

Nowadays, however, it seems that different rules apply: the financial services sector massively lost trust and status since the financial market crisis and the associated revelation about the way which kinds of bank transactions are performed – and how. In addition, the young school leavers are increasingly less willing to start an apprenticeship profession directly after their graduation. Instead, gaining international life experiences of staying abroad or beginning academic studies are more popular (Bundesministerium für Bildung und Forschung, 2016).

Another difficulty for this industry are the existing conditions to be able to create personnel intensive business models sustainably and in an economically successful manner: the flat yield curves, high regulatory pressure and changed customer behaviour due to increasing digitalisation are one of the few challenges that business models are currently facing and partly failing.

In contrast to the traditional commercial banks or people’s banks/savings banks, Non-Banks and FinTechs such as moneymeets, munio or vaamo are better able to adapt to the new market conditions. Here, the reasons for the decline of bank branches and changed customer behaviour in terms of monetary transactions can be found. Who is still going to a traditional bank, where bankers are just reading from the screen of their softwares/computers (Kurz and Rieger, 2013) – are customers not able to read by themselves?

The German Chamber of Industry and Commerce (DIHK, 2015) is aware of the fact that the way from the bank counter to the “bank browser” is paved. In addition, approximately 60% of the fiscal companies see the increased need for qualification of their junior staff and specialists. The insufficient competencies of employees are perceived as an obstacle to adapt to the digital trend by 40% of the interviewed companies. Due to the rationalisation impact with regards to employment relations, the German Chamber of Industry and Commerce expects the banking industry to face one of the most severe staff changes in the economy (DIHK, 2015). A current example for this assumption is Commerzbank. In its press release of September 2016, Commerzbank stated that “due to the automisation of work processes, downsizing in the amount of approximately 9.600 full-time employees” will happen by 2020. “At the same time, approximately 2.300 new jobs will be created in areas of growth.”

Moreover, the study plans and guidelines of traditional apprenticeship professions react slowly to the changed requirements towards bankers. While some individual branches of the Chamber of Industry and Commerce – such as the one in Oberberg/Gummersbach – identify the need for modernisation particularly of technical apprenticeship professions relatively independently, the responsible heads of divisions of the German Chamber of Industry and Commerce emphasise that “the training regulations are formulated technology-independently and the contents may be adapted individually by the training organisations and vocational schools” (Leendertse, 2016).

HRpepper also has doubts whether this apprenticeship profession has a future in its current form or in its relatively low change dynamic. The questions raised in our viewpoint are how sustainable the profession of the qualified bank officer is and which kind of staff is needed for a bank to remain successful?

The human factor will lose importance in this industry, machines will replace the services of bankers (Kurz and Rieger, 2013). There are – amongst others – three perspectives highlighting this issue, which are proven by studies and must be considered in our opinion (Bain&Company, 2012):

1. The customer himself/herself becomes a banking expert due to the open access to fiscal knowledge and the simplification of the securities business.

2. The banking institution by itself could waive staff due to the easily accessible (Online-) product portfolio because the conclusion of contracts is facilitated, for example, by self-identification-function.

3. Junior staff and experts are rather interested in an academic career in order to be broadly positioned in the finance and banking sector (although the applications for apprenticeship places and further specialist jobs remain the same in the past years according to the Federal Ministry of Education and Research (2016)).

Taking into account its experiences in consulting and personal discussions, HRpepper can state pros and cons to each of these three perspectives. In particular, the first two perspectives have a common challenge: the social and personal consultation competencies of humans. The core competencies of any qualified bank officer develop towards more important and demanded, customer-oriented social competencies in consultancy. The constructive offline-consultation between customer and bank advisor can be prepared for the customer by good online-consultation. In addition, the online-documentation, which can be accessed by the bank advisor and the customer, has the potential to be further edited for life.

So far, all FinTechs have needed a bank partner, too. For example, let’s have a look at the conditions that are subject to supervision. If the personal contact, the experience and the expertise of a human is required in the end, the future of the traditional finance industry lies in there.

With regards to the third perspective, HRpepper assumes that bank-specific knowledge can be learned on-the-job so that an extra banking apprenticeship is not necessary in the long-term taking into account the current regulations and contents of the apprenticeship study plans. We noticed that particularly large enterprises take the changes in their own hands with the help of company-internal training programmes. But because every enterprise has its own qualification programmes, the need for adjusted training regulations reaches the Chambers of Industry and Commerce only rarely. The German Chamber of Industry and Commerce acknowledges this finding (Leendertse, 2016) and emphasises that all of the employed managers must have digital competencies in order to be capable of acting in their domain (DIHK, 2015).

The discussion about the question how apprenticeship professions can be adapted to the current challenges of the market has just begun.