A daily routine does (not) always stimulate creativity 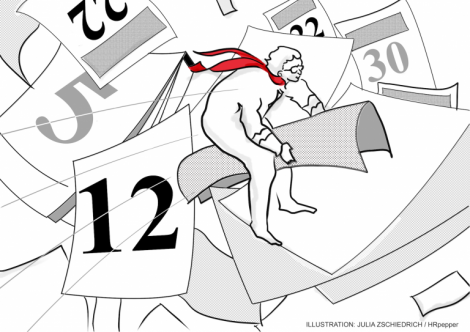 Creativity results from chaos and routine matches the bourgeois – at least according to an existing prejudice. But do routine and creativity really don’t go together?

Nothing seems to be more distant from creativity than routine. Routine is associated with eight hour working days, long commutes and terms such as „boring“, „restrictive“ and „repetitive“. In programming language routine is defined as a sequence of instructions to accomplish a (sub) task (Oxford, 2017). Creativity instead builds up on fantasy to reveal the potential of already existing ideas and to create room for the new (Mumford, 2003). We therefore can conclude that a steady routine restricts one’s creativity. We now wonder: are both terms really as contradictory as coffee and deep sleep – either one or the other? Or do they interrelate in a positive interdependency and thus routine is essential for being creative?

Interestingly, many well-known creative personalities have their daily routines. Mason Currey has carried together daily rituals and routines from celebrities such as Sigmund Freud, Frank Kafka or Woody Allen in a fascinating collection. Results show that instead of calmly waiting for inspiration creative and successful people use set routines to stimulate their constructive skills. Short breaks as naps and daily walks are among the most mentioned habits (Currey, 2013).

The US-American Professor of Psychology and founder of the Institute of Personality Assessment and Research at Berkeley University in California, Donald W. Mac Kinnon, analysed architects, scientists and engineers that were found to be the most creatives in their community over several years. He noticed that they did not show significantly higher scores in IQ but instead found an easier way to put themselves in a condition where their creativity could unfold naturally. He describes it as the ability to play (MacKinnon, 1963).

The British actor John Cleese and Psychotherapist Robin Skynner examined how „healthy“ families in a psychological sense work out well compared to successful organizations. It shows that people act or work in two different modes: the closed and the open mode. They spend most of the time in the close mode reacting actively, stressed and agitated, yet target-oriented. Tasks are completed according to their own or external standards. Pursuant to the study there is no creativity possible in the closed mode. In contrast to the closed mode people are acting more relaxed, thoughtful, less target-oriented and rather playful in the open mode. They move more freely and are open for new things (Skynner, 1991).

According to Cleese the open mode derives from five conditions: there is a need of a room free from any distraction (1) and a given period of time (2). Time should be divided into dealing with the problem and creating solutions on the one hand as well as making the ideas more concrete and viable on the other hand (3). The more time one spends on the problem not accepting the first best solution the higher the chance of developing more creative solutions. These results correspond to the research results from MacKinnon whereas professionally successful subjects in his study dealt with the problem longer than less successful individuals. According to Cleese in addition to spatial and time-related conditions there is a need for a trustful environment to release mental freedom (4). In this environment there is no „wrong“ (5) and enough space for humour with whose help one can switch most rapidly from closed to open mode.

Change between open and closed mode

The collection of Currey illustrates, that routines show a clear temporal relation: a timely allocation allows the creativity to be put into a framework.

For example, the success of the innovation method Design Thinking, which is applied in many companies, is also traced to the fact that you can deliberately switch between the two modes of open and closed and for creative processes to get a tangible structure. In the open mode problems are analysed. On the contrary in the closed mode possible solutions are developed, substantiated and implemented. According to the author Tanner Christensen it makes sense to distinguish between imagination (dreams or dreamy state for changing perspective), creativity (finding new ways to solve familiar problems) and innovation (further developing existing systems und ideas). Imagination serves to create new stories, which can be realised through creative processes (Christensen, 2015a). On the contrary innovation uses the power of creativity and imagination for the (measurable) optimisation of the already existing (Christensen 2015b).

On the basis of various studies, it can be concluded that a constructive interrelation between routine and creativity exists. A routine can be helpful to create creative open space, whereby an external guideline is less conducive. Companies ideally provide a framework for their employees where a routine is possible, however this routine can be adapted to individual needs. The same applies to creative open space: Everyone can craft its own creativity technique, if he is willing to experiment with his or her own thinking and acting, says author and neurobiologist Henning Beck from Scene Grammar Lab at the Goethe University Frankfurt am Main (Henning, 2017). By that he meant that everyone has its own working rhythm. While some operate routines, others work in line with the cliché of an artist’s chaos. The creative and imaginative power of humans becomes increasingly important in times where robots take over routine jobs. Imagination and creativity will remain human qualities for some time, where it is worth it to allow necessary open space. (Beck, 2017).

Skynner, Robin (1991). Institutes and How to Survive Them