Evidence-based management does (not) make sense 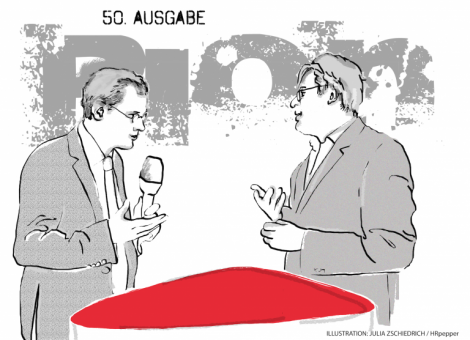 Since November 2012, HRpepper releases the publication “Believe it or not” on a monthly basis. It is about getting to the bottom of typical convictions and sets of values in (Human Resource) Management. Under examination: Are the often assumed connections and assumptions verifiable with empirical evidence? On the occasion of the 50th edition, we have talked to Professor Dirk Sliwka from the University of Cologne. He is one of the leading German-speaking researchers on evidence-based management.

Professor Sliwka, the field evidence-based management has become very popular in media coverage since the last few years. What are the advantages of this concept?

Prof. Dr. Sliwka: Whereas the current practice relies on untested trends, occasional success stories and management gurus, evidence-based management propagates the realistic view upon the facts. For this purpose, field studies are carried out in economic research and so-called meta-analyses are used in psychological research in order to summarise several studies on one topic and thus to be able to make robust statements about certain relations. Speculative arguments and assumptions are replaced by empirical evidence and “hard facts”. According to my evaluation, there is no lack of ideas and trends that sound plausible. They must be tested for empirical evidence at first in order to derive recommendations for action from them. In the end, it is not about the new one that is interesting but about the right one.

It can be critically argued against the concept that even the relationships that were found in meta-analyses are far from being applicable in the specific organisation. Does this reduce the usefulness of the idea?

Prof. Dr. Sliwka: Yes, this is correct. Organisations are complex socio-economic systems. Therefore, a generalising transition is always to be taken with caution. The causalities that were shown in the studies may apply in the respective company, but not necessarily. For this reason, it is important to carry out “A-B Testing” meaning field experiments in companies. Thus, it is possible to check whether the relationships that are described in the literature also apply in the specific organisation…

…this sounds demanding! Do companies engage in this?

Prof. Dr. Sliwka: Those companies, which have recognised the benefit of this method, do not shy away from the high effort. However, it is controllable: one just must be willing to “randomise”: subjects are randomly divided into two groups. One of the groups gets the instrument to be evaluated, the other one does not. Afterwards, the groups are compared based on their performance. Managers should experiment more often than they currently do. Before a training programme is implemented company-wide, it pays off to introduce it to a testing group first. If, for example, sales data or performance evaluations are available from the test group and control group, even the economic gain that results from the training can be estimated astonishingly well and whether it is worthwhile to use the training broadly.

Our Chairman of the Supervisory Board, Prof. Rüdiger Kabst, recently formulated provocatively “Only 1% of practitioners read scientific publications”. How popular are the findings in practice that science produces?

Prof. Dr. Sliwka: In my opinion, this depends very much on the education the managers have enjoyed and how they are academically involved. Nevertheless, it is true that only a few read the texts of the basic research. As a scientist, we have a share in this because we often deal with very isolated questions and the reading is not always a pleasure. For this reason, translators such as, the magazine “Personal quarterly” or “Believe it or not” by HRpepper are needed.

What is the reason for the fact that the issue of evidence in practice receives a higher attention in your opinion?

Prof. Dr. Sliwka: This is not just the case with the translators just mentioned, but also with the fundamental change in business administration. Today, business administration is to a greater extent an empirical, behavioral science than it was in the past. As a result, more and more managers can understand the concepts that form the basis for evidence-based management. And nothing has changed about the question of the effect of a measure that is of interest to managers. In the meantime research has simply learned how to identify clearly causal effects and therefore gain relevance. We noted that it has become much easier to convince companies that research and practice win if we conduct, for example, a field experiment together. And it also helps to ensure that A-B testing is part of everyday business in the Silicon Valley companies – and thus also in the perception of the practitioners from the academic ivory tower.

In the context of the great challenges of the future, many “experts” are currently surpassing each other with new and more radical proposals. For all legitimate demands, the discussion seems to take a normative direction. Slightly polemically pointed out: only those who are willing to choose themselves as managers, preach hierarchy, implement Holacracy and are otherwise quite agile, are “modern” executives. Do you find in your works an empirical evidence for these alleged connections?

Prof. Dr. Sliwka: I return to the beginning of our conversation. The concept of evidence-based management is not the new one, but the right one. Even if many of the new approaches show an everyday plausibility, we urgently need to show the effects empirically, otherwise it stays with pure belly feeling – and we also know that our abdominal feeling is subject to certain “biases” and can therefore deceive us. The fact that participation is fundamentally accompanied by positive commitment values is nothing new. Whether a leader has to be chosen, or whether leadership should be completely dispensed and only roll-owners act – that is a different kettle of fish. I am very curious about the direction of further development. For me, there are also significant logical breaks: In order for organizations to act more quickly on their environment, they need to become more agile. Alright. Whether a stronger democratisation is helpful to this, or whether a greater need for coordination takes agility away; I would like to see that being proven in a clear study.

Dear Professor Sliwka, thank you for this interview.

The interview was conducted by Matthias Meifert with Prof. Dirk Sliwka on 4 November 2016.