Why the digital revolution does (not) touch us 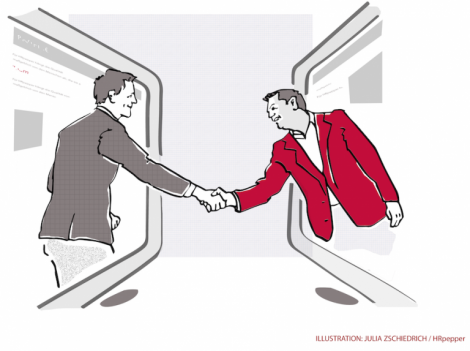 Industry 4.0, the Internet of Things, and virtual reality: Everybody is speaking about the new “digital revolution”. And nobody is quite sure what to make of it: “Learning robots will replace many jobs, not just on production lines, but also in offices”, the Tagesspiegel warns (11 January 2016). The worry is that our society might be falling apart into the camps of the digital winners and losers (Süddeutsche Zeitung on 22 January 2016). Already in the late 1990s, people were concerned about alienation in virtual work (Sennet, 1998). The first “counterrevolutionary” movements are beginning to make themselves known: today’s Luddites are the people speaking of “offline trends”, “digital detoxing” or “email free Fridays” (cf. Horx, 2015).

We can find exciting new perspectives in recent research into the role that our tactile sense plays in social interaction. In our digital world, we tend to rely mostly on our visual senses. But while our eyes are easily tricked by optical illusions, we know only few tactile illusions, as neuroscientist Hubert Dinse from the University of Bochum explains: “The sense of touch is our oldest sense in evolutionary time, and it might be the most honest and natural of all our senses.” (Gehirn und Geist, 9/15).

The sense of touch plays a major, but still very much ignored role in social interactions.

Tests conducted by the Leonard et al. (2014) have shown that a brief touch, for instance on the arm, makes people want to help us more, and it helps us regulate our feelings. People use subtile signals – like such nonverbal interactions – to decide whether, for example, to cooperate in negotiations. Economic scientists including Schroeder et al. (2014) have found that students are more cooperative and disclose their preferences more in a simulated negotiation after they had shaken each others’ hands.

The healing effect of touching has also made its way from esoteric hocus-pocus to empirical proof. Patients who had been given a brief massage or simply been touched by the medical personnel they were dealing with have reported a feeling of existential belonging, comfort, calm, and security. The simple touches also made the hospital workers feel better (Airosa et al., 2013).

Eisenberger (2013) explains this in terms of the evolutionary advantage of close social relationships. A threat to these relationships will set off the same neural and physiological alarms as a real physical threat, because our social network used to be crucial for survival in the very real sense of the term. The SCARF model proposed by Rock (2008) comes to very similar conclusions as it turns what neurophysiology has told us into a management model for “neurologically informed” leadership. The letter “R” in that acronym stands for “relatedness”, meaning the importance of feeling a sense of belonging in a group. If a person feels that he does not truly belong, his or her body will show a massive threat response.

The SCARF model has already become a staple of e.g. executive training, but the research on the sense of touch is still being ignored in the organizational context. We cannot yet say what its implications for our working lives might be.

What we can see is that our perception of the world and our behaviour in social interactions is determined much more by our tactile senses than we would have assumed. Fortunately, some might say, we have not (yet) got a digital equivalent of a handshake or a touch on the shoulder.

A reassuring hand resting on the shoulder of a colleague – of course, very much dependent on the context – might be going a long way further towards real communication: something to remember especially in the vertigo-inducing world of constant acceleration, change, and alienation that we are living in.