One creative mind can (not) pull the whole team down 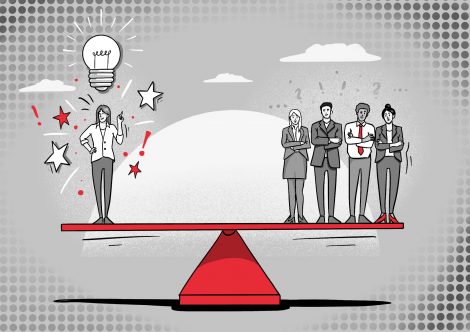 Teamwork is more important than ever in our working world to deal with increasingly complex issues. In this context and on the way to innovations, creativity is undoubtedly an important strength

Everyone has certainly been happy to have a particularly creative mind in the team – in the hope that this will already bring innovative solutions. There are also scientific findings on this subject: team creativity seems to depend positively on the most creative team member (Somech & Drach-Zahavy, 2013).

Then how can it be that there are always cases in which creative individuals fail together?

“Creative stars” are both a curse and a blessing

A new study by Li, Li, Li & Li (2020) provides new findings in this respect: It shows that particularly creative team members can have both a positive and a negative influence on the creativity of the entire team. It also provides information about when teams really benefit from particularly creative individuals.

The study deals with the influence of so-called “creative stars”, i.e. team members who are particularly creative compared to the other team members, on the creativity of the entire team.

The researchers carried out two independent studies with teams from research & development and sales in various industries. In two waves of the survey, teams and team leaders were first interviewed about how they organize teamwork, and then the respective managers of the divisions were interviewed about the degree of creativity of the teams.

The study results show the following:
First, the assumption, which is also widespread in everyday work, is confirmed that particularly creative minds who play a central role in teams (measured by the extent to which team members rely on receiving relevant information from this person) have a positive effect on the creativity of the entire team.

However, the results also show that these creative minds do not have an exclusively positive effect on the team: By hindering the knowledge acquisition of the less creative team members – measured in explorative and exploitative learning activities – they have a negative impact on the creativity of the whole team.

As a third key finding, the researchers are able to demonstrate that there is, however, one quality of team collaboration that can counteract this negative effect: team coordination – the extent to which interactions within teams are effectively coordinated.

What do these results bring us in practical terms – if we want to achieve really creative results in teams?

The interactions between particularly creative, high-performing employees and their team members deserve special attention, as they can have an impact on the performance of the entire team.
When designing teamwork, we should pay more attention to ensuring that the most creative minds can develop their full potential on the one hand. Here, the study explained shows that this can be achieved, among other things, by ensuring that these employees actually play a central role in the (team) network (Li et al., 2020).

On the other hand, the other team members should also be aware of the importance of their own contributions and thus actively invest in knowledge acquisition and learning. Within the team, a common way should be found to prevent individual team members from relying too much on a supposedly particularly creative head or contributing less actively to the team goal due to its dominance. Creative minds also benefit from the ideas of others and use various information to arrive at new solutions.

Last but not least, the study shows us that effective coordination of team work – for example, common goals, a common language or cooperation at eye level (Li et al., 2020) – is worthwhile. In this way, the most creative among us can be relieved of their important role in teams and the participation of all in the creative process can be encouraged.

Then chances are good that the “creative stars” will develop their full potential together with their team.

Pirola-Merlo, A., & Mann, L. (2004). The relationship between individual creativity and team creativity: Aggregating across people and time. Journal of Organizational Behavior, 25, 35–257.

Somech, A., & Drach-Zahavy, A. (2013). Translating team creativity to innovation implementation: The role of team composition and climate for innovation. Journal of Management, 39, 684–708.