Gender has (no) influence on the choice of profession and career 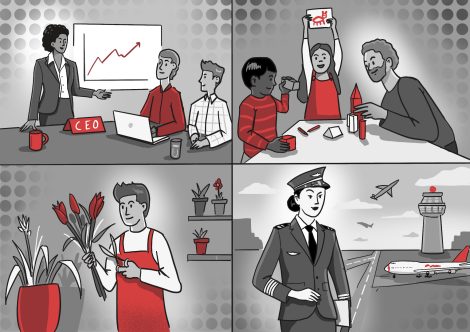 At first glance, all doors are equally open to men and women when it comes to choosing a profession and career. Yet we talk about male or female professions and see few women in management positions. Why is that?

Due to the shortage of skilled workers, job advertisements are increasingly targeting the understaffed gender, such as women for skilled trades or men for the profession of educator. Nevertheless, statistics such as the training report show that when it comes to choosing a career we still talk about typical male or female occupations. In addition, companies, larger ones especially, come under public criticism when it comes to the underrepresentation of women in management positions. Even quota regulations do not seem to solve this problem.

Similarities and differences between the sexes

A first approach is provided by the extensive work of psychologist Jane Hyde: She found no or almost no difference between men and women for 80 percent of the variables (Hyde, 2005). From this follows her hypothesis that the sexes are more alike than different. She thus contradicts the perception that dominates research and the media, which tends to focus on contrasts (Schaarschmidt, 2015).

Many researchers affirm that “almost all stereotypes about men and women turn out to be greatly exaggerated when the magnitude of the differences is soberly considered” (Retzbach, 2017). Studies show that new skills can be learned through training, which is also visible in the brain. Because of this mutability, the brain is “the worst possible place to look for innate differences between men and women,” says psychologist Marlies Pinnow of the Ruhr University in Bochum. In contrast, neuroscientist Larry Cahill does not believe that the brain is “a blank slate and can be changed at will through experience” (Scharrschmidt, 2015). It remains unclear to this day and perhaps forever how much is innate or acquired (Retzbach, 2017).

Perhaps social psychology can provide answers. Here we speak of gender stereotypes, which represent our mental model about how the sexes (should) differ (Deaux & Kite, 1993). They cause our evaluation of a person (including ourselves) and their abilities to change according to gender. In addition, gender stereotypes are shown to affect social interaction (Deaux, K. & LaFrance, M. 1998).

A study by the University of Konstanz, for example, shows that scientists are often perceived as less qualified, even though they provide the same services (Woelki, 2010). This could be one of the reasons why, according to the Federal Statistical Office, women still earn an average of 18 percent less per hour than men, mainly in western Germany (Destatis 2022). However, equal treatment would have advantages. A study by Elsevier found that mixed-gender teams are more likely to incorporate diverse perspectives, approaches and experiences (Pan et. al., 2015), which is essential for the innovative strength of companies.

One possible explanation for role models: We are already shaped as children, for example through the attributions on clothing and toys (Retzbach, 2017). Children also look up to role models of the same sex and strive to adopt their behavior (Steins, 2010). It stands to reason that our imprinting in childhood and later in life has an influence on our choice of profession and career. It determines the answer to: Can a man be a florist or a woman a pilot? And can a woman run a company?

To ensure equal opportunities, everyone should question their behavior and decisions in every context. For companies, it is not enough to launch campaigns to attract more men or women. Hiring processes must be scrutinized to ensure they are free of gender bias. It is also essential to provide education about stereotypes, create space for reflection and transfer the conscious handling of them into the corporate culture. An initial tool can be checklists that support supervisors and employees in making good decisions.