Change as an identity crisis? – When change stories are (not) actually helping 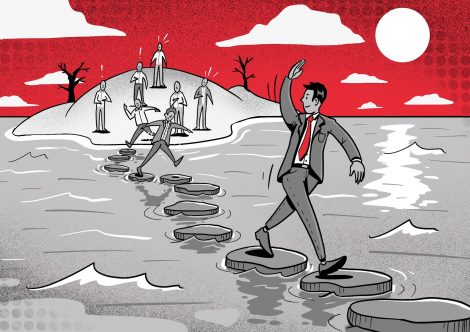 The importance of good communication in change processes is indisputable. A new study now shows what really matters in a change vision and brings a new perspective to the discussion with exciting findings.

Ever more frequent and far-reaching changes in companies demand a lot from organisations and their members. Only recently the „Change-Fitness Study 2018“ of Mutaree GmbH in collaboration with the specialist association Fachverband Change Management of BDU (Association of German Management Consultants) discovered that 77% of change projects are not successful from the point of view of the 368 respondents. This means that only in 1/5 of the cases employees actually get “on board” und manage the change successfully. What do these numbers mean? And what factors can raise the likelihood of success?

Change processes are generally considered successful when “involved” employees approve of the new aspects, accept them for themselves and together bring to life, e.g., new structures and processes. In management research there prevails a divided picture of the vital role of leadership in these processes. It especially appears to depend on the way the change story is told by leaders, the so-called “change vision“ or “leader‘s vision“. It is considered the key factor influencing how motivated employees are to accept an organisational change (e.g., Yukl, 2010).

The approach is not new – quite the opposite. Already the proven concept of transformational leadership (Bass & Avolio, 1990) describes a strong leader’s vision in the dimension of inspirational motivation. More recent studies about efficacy of leadership also show that outstanding leaders communicate in an especially visionary way (e.g., Stam, Lord, van Knippenberg & Wisse, 2014).

Research up to now has found the following insights: A good change vision emphasises that the organisation’s status quo is not sufficient (anymore) and not future-proof. This creates a new spirit of optimism and the desire to leave the past behind. As an alternative, the future image of the organisation is presented. This should be emotionalised and idealised in the change vision generating a strong sense of urgency in the individual, who then wants to leave the status quo and set off for the future (e.g., Kotter, 1995).

The current study of Venus, Stam and van Knippenberg (2018) now brings a new perspective to this discussion. The researchers argue that a sense of urgency alone is not sufficient as change projects evidentially also fail when employees are very aware that the organisation needs to change and further understand that these changes are in fact in their interest (Kotter & Schlesinger, 1997).

The researchers explain this with the “theory of social identity“. They assume that employees identify with their organisation more and more after joining it. It becomes part of everyone’s identity and self-image and builds the so-called social identity. As humans we strive for continuity and stability when it comes to the core aspects of our identity (Sani, 2010). Every change is a threat to this continuity and initially leads to a sense of fear and resistance. When parts of “what the organisation stands for”, i.e. key elements of organisational identity, change, we also feel like the stability of our own identity is threatened. This does not always have to be a major restructuring – the same phenomenon occurs when processes, tasks or behaviours change, provided that these represent the key elements of the organisation from an employee’s point of view (Ellemers, 2003).

Van Knippenberg and colleagues assume that leaders can react to the identity threat with a good change vision and reduce uncertainty. In order to do so, the change vision needs to emphasise continuity and stability and highlight the aspects that will not change with the upcoming change. They found support for these hypotheses in two different studies.

In a field study, data from 209 manager-employee dyads were evaluated shortly after a communication about upcoming changes (among others, expansions, fusions, changes in the product portfolio, etc.). They found that leaders who were communicating a change vision with a strong focus on continuity were especially effective, as measured by the employees’ so-called “support for change”. This correlation was particularly strong when employees were experiencing high levels of uncertainty in their work environment. In a lab study, in which the proportion of continuity statements in the change vision was manipulated, the direction of this correlation was validated. It was, thus, supported that: A leader emphasising continuity in a change vision is particularly effective and yields a higher level of employee support for the change.

Leaders as guardians of stability

Therefore, when communicating upcoming changes leaders should not only describe the necessity of change and the appealing future vision, but also communicate what does not change. Here it helps to highlight that core elements of the organisational identity are preserved. This can be values of the organisation that shape collaboration. New necessary behaviours can also be described as evolved characteristics of what is already there, building on what has previously made the organisation and its employees successful. Overall, it should become clear in the vision that the change is no threat to the identity of the organisation. What is interesting is what these findings mean for processes of cultural change which focus on a necessary change of, e.g., values or cultural aspects. Here, too, it is certainly advisable to strike a good balance between maintaining and changing in order to take the employees with you on the path to a new world and convince them of it.

The bottom line can be summarised as follows: Expectations toward leaders are rising. They do not only have to be change agents, but also have to be perceived as guardians of stability. In this way, they provide orientation and reduced uncertainty – and thereby raise the likelihood that all employees of an organisation successfully manage the upcoming changes.

Conner, D. R. (2006). Managing at the speed of change: How resilient managers succeed and prosper where others fail. New York, NY: Villard Books.