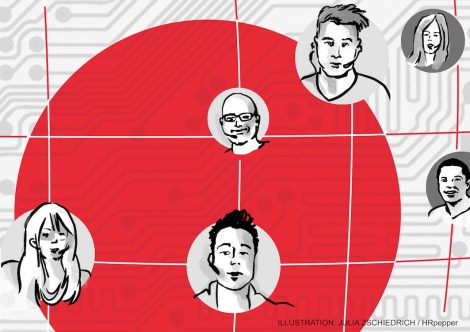 Digitalisation in everyday work – virtual teamwork has increased significantly in recent years. The term “virtual teams” is used when employees have reduced personal contact, work together over a greater distance and communicate electronically. More and more corporations are using this virtual form of collaboration as it increases flexibility and saves time and money. On the other hand, sobering figures: Many virtual teams fail despite or because of leadership. The key question arises: how does leadership work in the digital age? What is needed to lead virtual teams in the future?

Virtual collaborating teams have become more and more the norm in corporations: According to a recent Siemens study, almost 80 percent of all virtual teams nowadays work regularly in virtual teams, but only 44 percent perceive this as productive as personal contact.

A recent trend study conducted by market research company PAC entitled “Collaboration of virtual teams in German companies”, in which 152 managers were surveyed, came to similar conclusions: 70 percent of respondents confirmed that virtual collaboration is becoming increasingly important for business success. At the same time, 30 to 50 percent of managers surveyed report negative consequences for productivity. A study by the Rochus Mummert Consulting Group shows that three out of four virtual teams fail.

According to the studies mentioned above, the main reasons for this are the following: Mostly there is a lack of common rules, which are usually formed in on-site teams in the course of interaction. Conflicts are also more difficult to deal with in virtual teams, as they are usually detected only when it is too late and team members stop working or leave the team due to their physical distance. However, the decisive reason for this failure – and there is a consensus in current study results – is the fact that virtual teams are led in the same way as face-to-face teams, however, the challenges listed above do not apply. Does virtual leadership require a new understanding of roles?

A team of scientists led by psychologist Julia Hoch at California State University was working on this question. They interviewed 565 employees from 101 R&D teams in international manufacturing companies. By definition, teams were virtual when employees worked in different countries and communicated electronically. Control groups are local teams. The researchers examined the extent to which three types of leadership influenced the performance of virtual teams: 1. classic leadership (where the managers tried to motivate their employees or build a trusting relationship through meaningful communication with them), 2. structural leadership (where the managers made clear which rewards were to be expected for what performance; furthermore, they emailed and spoke in understandable terms), 3. shared leadership (the responsibility laid on several shoulders; many in the team were able to participate).

Surprising results of the study showed that virtual teams did not benefit from motivating and empathetic leadership. Rather, they were better – in terms of the amount of work, quality of work, schedule and budget – if managers made clear announcements and provided precise information. In the non-virtual teams, the reverse was true in terms of leadership style. Shared leadership has had a positive impact on productivity in all teams (virtual and non-virtual).

What conclusions can be drawn from the results? Does effective management of virtual teams require a new understanding of leadership – away from leadership via meaning towards a clear communication of tasks, which is distributed on many shoulders? Is it more about concrete announcements and a transparent expectation as well as reward system than about motivating words and a common vision?

An important insight for everyday work as an answer to this question ahead: The classic and successful leadership approach in face-to-face teams by using motivating words and the imparting of meaning, fails in virtual teams. In this case, clearly understandable announcements, transactional management activities such as e. g. continuous and frequent interactions, timely, regular and clear information sharing, constant feedback and the consistent fulfillment of commitments – more than it is necessary in non-virtual teams.

However, the second important finding of the study should not be overlooked: Virtual teams also work more productively with “shared leadership”. If these two findings are interrelated, it means that virtual managers should give a clear structure, but also share leadership with their team and act as part of the team, i.e. as “primus inter pares”.

In order to implement “shared leadership”, it is crucial to put together and develop teams according to skills. The researchers A. Albrecht and E. Albrecht-Goepfert came to these conclusions in their study “Virtual Teams” (2012). They examined 324 teams and interviewed the participants. According to their results, important competencies of productive virtual teams include not only technical knowledge, but also multidisciplinary skills. In virtual collaboration, communication is often limited to telephone, video conferencing, mails or chats. Employees with distinct communicative and social skills are more successful in this form of communication (see also BION 09/2017).

In short, productive teams only emerge when managers succeed in offering orientation and shared leadership (via clear roles and responsibilities) and in developing team members in their multidisciplinary competencies. The successful manager of tomorrow will thus assume the role of “structuring” and “primus inter pares” in the sense of a coaching function.

It is only to be hoped that companies will give managers the time they need to put together and develop a virtual team accordingly.
If these framework parameters are present and executives adopt their new roles, the quote of the German author Annette Andersen might also apply to virtual teams: “Frequently, distance brings people together!”