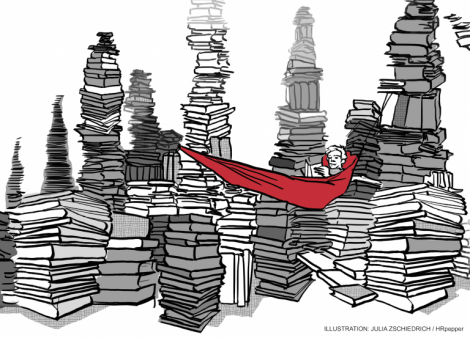 “Just take a break!“ – this appeal is often ignored as the results of a current survey by the Federal Institute for Occupational Safety and Health (BAuA) have shown. Approximately 17.000 German employees were interviewed regarding their habits to take breaks. More than a quarter (26%) responded that they work continuously without any break mainly because there is too much work to do.

For a moment this sounds perfectly plausible. Compared to a colleague who does not allow himself to take a single small break, one is not able to complete as much when interrupting work for a rest. However, the opposite is the case as supported by scientific evidence: regular breaks do have a positive effect on recovery and productivity. Brain research shows that the time loss of taking a break is at least balanced and often even overcompensated by the increased productivity after the break.

Although the one or other restless colleague has not internalised this finding yet, it is not entirely new. But is that true in all cases? Are breaks per se relaxing? Or do they have different good or bad effects on someone’s own recreation?

The psychologists E. Hunter and C. Wu of the Baylor University Texas (2015) deal with those questions regarding the quality of breaks. They instructed 95 administrative employees to complete online questionnaires after breaks for five days. In total, 959 break protocols were created, which captured certain features of the break: how exhausting and interesting it was, when and how long they were taken. In addition, the researchers asked for three „resources“: „What is the degree of your current energy, motivation and concentration level?“ Moreover, five different types of aches and pains were surveyed: headache, eyestrain, back pain, muscle aches and arm pains. In the end, the participants completed a final questionnaire about fatigue, job satisfaction and job engagement. The results were not only surprising but also gave guidance about how to optimise breaks.

With regard to the optimal time to take breaks, the researchers discovered the following; the more hours went by since the beginning of work, the more often the participants complained about general fatigue and other symptoms of poor health. Furthermore, the participants who took many small breaks generally felt better and more energised than their colleagues with fewer but longer breaks. However, the most interesting finding is related to the activities done during the break and contradicts against the popular belief that those activities should be distracting and unrelated to the work tasks. According to the psychologists, it does not matter how breaks are taken. Instead, it all comes down to pleasure and voluntariness of the activities. A small chat with the colleagues about a running project can be more relaxing than a quick walk as recommended by the boss.

Current research results of the German study group of the Rheinische Fachhochschule Cologne and Humboldt University also confirmed the importance of consciously doing the right activities during the break (D. Putz & T. Scheel, 2015). In this regard, the researchers dealt with the question to what extent the sharing of a few laughs with colleagues can prevent the negative effects of time pressure. For this purpose, they gathered self-evaluation-forms of 170 employees from four different retail outlets. Their findings reveal that the recreation effect of breaks for the employee is significantly increased by a pleasant activity: if colleagues share a laugh at least twice a day, the relation to time pressure and affective irritation disappears.

But if voluntariness and conscious choice of breaks contribute to recreation, which implications does it have on employees who consciously decide against breaks? Are there also other possibilities to relax during work?

This question was investigated by the researchers S. Ohly and A. Görlitz of the University of Kassel and the University of Freiburg (2015). In their study they examined how far routine work activities can fulfil the same function as breaks. The relation of routine work and current affective experience was examined by an experienced sampling-study with 32 participants. With this method the test persons wear a signal generator, which instructs them irregularly for several times per day to rate their current condition on scales.

Then, the results were validated in a diary study with 325 participants. In this regard, intrinsic motivation to complete tasks, scope of action and complexity of work were controlled amongst other things. The findings show that routine work tasks are related to a lower negative activated affect and a later enhanced positive activated affect. This study revealed for the first time that cognitive less demanding tasks contribute to affective well-being in a similar way like short breaks.

Although the studies quoted above do not explicitly deal with the productivity of employees but with their own well-being “only“, it might be worth to not only work consciously but also take breaks consciously. The next time, consider what is relaxing for you; and if that is routine work, your colleagues will forgive you for sure!