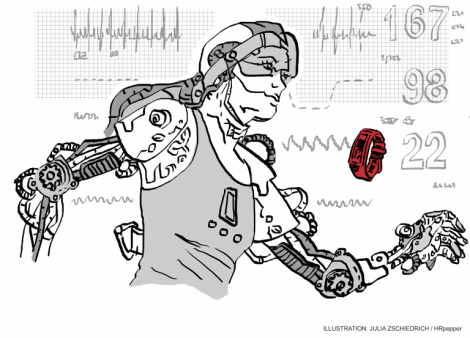 Have you seen the YouTube video in which a toddler tries to flick through a magazine by “swiping”? Digital natives might have a hard time of dealing with analogue formats, but they take to digital environments like a fish to water. For digital beginners, the remnants of the analogue generations, the challenge rather lies in making that leap into the digital era. What does this mean for companies, and what can HR contribute in this phase of fundamental change?

We will have to see whether we will indeed see all of these trends in full force in the second half of 2016. But it pays off to consider what they mean, for a variety of reasons.

The Future Study 2014 published by the MÜNCHNER KREIS e.V. goes back to a survey of 517 experts from different sectors of industry. They were asked: Is digitalization becoming the Achilles heel of Germany’s economy? There is general agreement that we need to establish new forms of education and new qualifications, create and spread awareness concerning the many aspects of digitalization in the corridors of power, teach media literacy to get people to handle their data more consciously and more responsibility, redouble our innovation efforts and change processes, and keep promoting research and science.

The surveyed experts believe that the fate and future of the transformation will not be affected much from within Germany’s businesses. The great actors seem to be working at the great internet companies or elsewhere in the US economy. The study’s participants are also vocal about the great importance of focusing on the benefits for the customer for companies that want to remain competitive for the rest of the decade, followed closely by the importance of providing meaningful training and qualifications.

In their study, Frey/Osborne (Frey, C. & Osborne, M.A., 2013) found that around 47 percent of all jobs in the United States might fall victim to automation in the next twenty years. When applying that study to Germany, the Centre for European Economic Research clearly spoke out against the original assumption of massive changes in the world of work. Still, both studies agree in principle, that more and more automation of routine work will clearly affect job profiles and requirements everywhere. This again suggests a fundamental adjustment of employment and education to the new requirements of the digitalized world.

We can conclude that the changing nature of established occupations, the need to teach digital skills and digital thinking in all aspects of a business, and the need to support these change processes are some of the most urgent challenges for many industries and actors in the economy. Who would have thought that the humble old taxicab would be threatened by digitalization? But then there came Uber.

The working paper “Digitalization of the economy and its impact on labour markets” of the European Trade Union Institute ETUI (Bonin, H., Gregory, T., Zierahn, U., 2014) investigates the changing way of managing information and its impact on work, the creation of new, dynamic forms of employment, new leadership models, and the breaking down of the barriers between work and private life.

The paper predicts a rise in freelance and self-employed work. Leadership systems will also be changing, as IT systems are interfering more with the personal freedom of employees and taking over leadership activities. The authors also see a merging and confusion of work and leisure time.

A final conclusion: All of these findings and concepts describe one likely future for the world of work. What we do not know yet is which route will take us into that future. This is where HR comes in, with the need to support companies during that transformation, top protect their competitiveness, and to help the changes along while ensuring a humane and humanistic process.

HR work is not the hype. It is the seedbed in which the companies and employees of the digital world are growing and evolving.

Frey, C. & Osborne, M. A. (2013). The Future of Employment: How Susceptible are Jobs to Computerization?. University of Oxford.