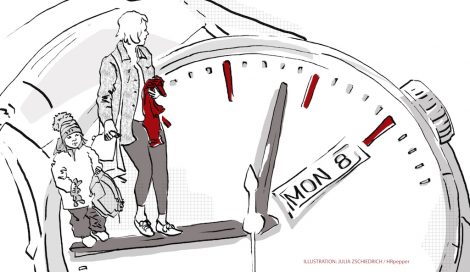 Most employment contracts in Germany expect the employee to work a 40-hour week. That is about a quarter of the total number of hours we have in a week. If we then take away another seven hours every day for sleeping, we have less than half of our lives left for other things – not counting the time spent every day for e.g. commuting. And not counting the average 2.7 hours of overtime that the German worker puts in (putting us squarely at the top of Europe’s league table). Of the happy few who have part-time contracts with fewer hours. They have the time for enjoying their own lives and cultivate their interests. If only it weren’t for that little matter of money. What fortune, what luxury to be able to afford a part-time job. If money were no issue, everybody would work fewer hours and spend their time on more meaningful things. Or would they?

A study by Martin Fritz (2015) explores whether reduced working hours really make people happy. The happiness of different groups of employees (distinguishing between full-time and part-time contracts) is measured in the form of the discrepancies between their actual and their preferred working conditions. A positive experience of work is one where the aspects that the employees valued most were indeed rated highly in practice.

This goes a long way to explaining the apparent injustice of part-time employees receiving a much lower hourly wage despite having qualifications similar to their full-time peers. Subjectively, German part-timers do not consider this discrimination (p. 11). People working in part-time state that they care less about monetary rewards than other factors. This becomes clearer when we look at who actually works in such jobs: It is mostly married women, aged 45 on average, with one or more children living at home and a spouse in employment. It is clear: Most part-timers do not work fewer hours to have more time for themselves. Children are still the dominant factor, supported by society’s still prevalent expectation of men as the breadwinners (p.7f).

The situation is completely different in Sweden. Here, women account for ‘only’ 73% of all part-time employees. At an average of 36, they are not only much younger than their German peers, they are also typically single and childless. However, it would be misleading to think that Scandinavian people care more about leisure, even if it comes at a cost. The reason is rather that even married mothers pursue full-time employment in Sweden – part-time work is considered the inferior option. People working fewer hours are often career starters with temporary contracts. Not exactly the epitome of happiness.

This country comparison shows one thing very clearly: Happiness not only depends on our own expectations, it also depends on our socialization and the values of the society we grew up in. Apart from the extrinsic quality ‘income’, let us consider intrinsic factors like autonomy or variety at work. People who can decide for themselves how a certain job needs to be done will accept responsibility for their work. They will find it easier to identify with their jobs, which has a positive impact on the quality of the work experience. It does not matter whether they do so in part-time or full-time employment. However, part-timers are at a distinct disadvantage when it comes to such autonomy. The gap between expectations and reality is particularly striking here. Just because people spend less time at work does not mean that they do not care about autonomy in their jobs (p. 23f).

People from all professions and disciplines share a preference for a certain degree of diversity and variety in their work. Again, part-timers are often at a disadvantage. They are offered far fewer variety in their tasks. The picture is clear: The intrinsic quality of work is lower for them than for their full-time counterparts. The impression might be that part-time employees are basically unhappy with their work: They get less money for less diverse tasks, can take few decisions by themselves, are hardly ever in managerial positions, and – in Sweden – have the sword of Damocles dangling above their heads in the form of temporary contracts. However, it is interesting to see that the wish for a real balance between work and family life is as prevalent among full-time employees as among part-time workers, irrespective of the country they are from. About half of all male employees and two thirds of all female employees would be ready to sacrifice their career prospects for a better life balance. They would accept a professional disadvantage in return for a more satisfying private life. And this is where the crucial plus point of part-time work comes in: Even though their full-time peers care just as much about work-life balancing, part-time employees are empirically more satisfied in this respect. ‘Time’ becomes a measure of happiness. It is so important that people accept many other drawbacks in return. (Hammermann et al. 2015).

It can help to consider other alternatives, such as the Swedish model of a six-hour day, which several companies and the municipal institutions of Goteborg have been using for the last year (stern.de 2015). The precondition for such a shorter working day was that it did not affect efficiency – and apparently, it is performing even better than expected. The large dairy business Tine, for instance, saw its effectiveness rise not by 20%, but by a full 50%. All participating companies also mentioned a definite reduction in absenteeism. More employment of this type could be created in the service sector in particular – an interesting prospect for political leaders who might be looking at a way to bring down unemployment figures.