Technology is (not) a solution to reduce stress 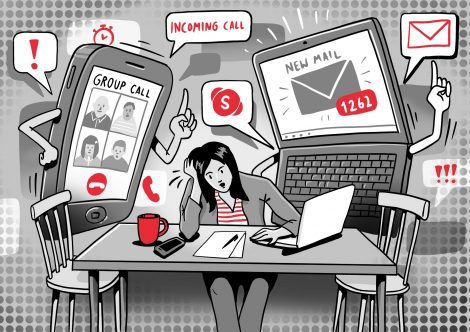 The advantages of the latest information and communication technologies are obvious: cooperate independently of time and space, save unnecessary travel time, communicate more efficiently, coordinate appointments more transparently. But does the “digital way of life” in the world of work really only reduce our load?

We’ve all experienced it before – the seductive power of information and communication technologies (ICT) and the way they fascinate us every day. A paradoxical feeling, being torn between the comforting feeling of constant attention and the overwhelming moments of permanent overstimulation. The digital revolution has distorted the concept of the separation between online and offline that we learned many years ago and, consequently, the symbiosis of the two worlds has now infiltrated our everyday lives as a normality.

In days like these, it is even more important to be aware of this convergence and to internalize the challenges, the opportunities, but also the impact of our digital times. We should ask ourselves what the blend of digital and analogue means for us, both as private individuals and as employees. What does it mean for our current workforce, for which working remotely is becoming more and more natural?

The advantages of today’s ICT are obvious, in these times more than ever before. While a virus forces us into isolation, digital tools enable many employees to remain productive. Vir-tual meetings allow collaboration from any location, digital calendars create transparency, short distances and easy coordination. And, yet, we quickly forget that technology often comes at a price. Nearly everything takes place in front of a screen: one video conference after another, e-mail battles, file documentation, social contacts, intranet, linkedin, xing, and last but not least another push message from our news app.
Our head is buzzing.

Studies show what we have been suspecting for a long time: People are increasingly over-whelmed by the growing number of communication interfaces and possibilities (Robinson, 2014; Rosen & Samuel, 2015). The diversity of information and communication technologies, which is oftentimes viewed so positively, can quickly become a burden. To describe this phenomenon, researchers speak of a concept known as “technostress” (Ayyagari, Grover & Purvis, 2011; Ragu-Nathan, Tarafdar & Ragu-Nathan, 2008).

Discrepancy between resources and requirements

The term “technostress” describes a concept influenced by pathological psychology that deals with those consequences of ICT that have a major impact on our everyday life. In an early definition, the term refers to “a modern adaptive disorder caused by the inability to deal with new computer technologies in a healthy way” (Brod, 1984). Anyone who concludes from this that people, who did not grow up in a digitalized world, are more affected, and so called “digital natives” are excluded from this phenomenon, is mistaken. Rather, the technostress model revolves around the core idea that employees feel distressed when they perceive a discrepancy between their resources (e.g. time, energy, skills, knowledge) and the demands that their work environment places on them (Lei & Ngai, 2014) – and this holds true independent of age and level of technical knowledge.

In times like these, we are therefore facing the phenomenon of the “technology paradox” (Hajli, Ibragimov & Sims, 2015). Let’s be honest: ICT is the only way for many employees to work in the current situation in the first place. They remain connected, they improve their ability to use time and space more flexibly, tasks become more condensed, and so parts of the workforce may even become more productive. Yet, at the same time it also creates enormous new challenges that every employee has to face constant simultaneous tasks, permanent connectivity, information overload, frequent changes of function, continuous need for learning, work-related uncertainty and technical problems.

The excessive use of ICT in the workplace, thus, causes stressors and can lead to conflicts between work and private life, work overload and role ambiguity (Ayyagari et al., 2011). Re-searchers have pointed out that employees in telework environments, where communica-tion and interaction depend on such technologies, are particularly at risk of this type of work-related stress (Weinert, Maier, Laumer & Weitzel, 2014). Technostress can be much more severe for people who have been working in an “analogue” working environment for a long time. They experience increased work stress because they need to deal with rapid and fun-damental changes in the working environment while having to keep up with technological change (Sou & Lee, 2017).

The current acceleration of digitalization accordingly promotes technostress and can trigger physical symptoms such as headaches, emotional instability, concentration problems or feelings of anxiety on the one hand, and reduced productivity, motivation and a lack of inno-vation on the other (Ragu-Nathan et al., 2008).

Of course, we should bear in mind that not every person reacts to digital technologies in the same way or is equally stressed by them. For this reason, it makes sense to ask the question how stress is defined in the first place. Probably the best-known model for this is the transactional stress concept of Richard Lazarus (Lazarus & Launier, 1981). He distinguishes between three levels of assessment.

The first step is to evaluate the present situation as positive, irrelevant or potentially dangerous (stressful). If the latter occurs, the second step is carried out and an analysis of the available resources how to cope takes place. Only when the person concerned perceives an imbalance between the requirements of the situation and their own available coping resources a stress reaction occurs. The subsequent coping behavior can then be either problem- or emotion-oriented. Which mechanism is used always depends on the particular person and situation. In the last step, the chosen coping strategy is evaluated and thus influ-ences future stress situations. This coping process works better for some people than for others, especially in an ICT context (Srivastava, Chandra & Shirish, 2015).

Apart from this individual perspective on the topic of technostress, obviously there are also ways in which organizations can support their employees in addition to their personal coping strategies. For example, trainings to acquire ICT-related knowledge and technical support can be offered proactively. Also, a vivid corporate culture embracing mistakes can help to reduce fear of contact with technical novelties and, as a consequence, also reduce its stress factor.

The problem with such measures, however, is that they only work if they are both professionally and authentically designed and implemented. Therefore, it might be easier to implement very selective measures that can be individually adapted by each employee: At this point the importance of a clear distinction between online and offline should be explicitly pointed out once again. This can be achieved with the help of techniques that lead to mental and physical relaxation and that ensure the active interruption of digital communication for a while. For example, mental exercises (concentration exercises, meditation, yoga), physical activities or regenerative techniques (natural nutrition, homeopathy, naturopathy) can be used. But employees themselves can also support each other, for example by not sending e-mails late in the evening or by using the “delayed sending” function.

At the end, it’s quite simple: In times like these, it’s more important than ever to reflect and take care of each other. And so everyone – may they be an individual, colleague, manager or an organization – can and should do their part to prevent technostress.