Personality types are (not) set in stone 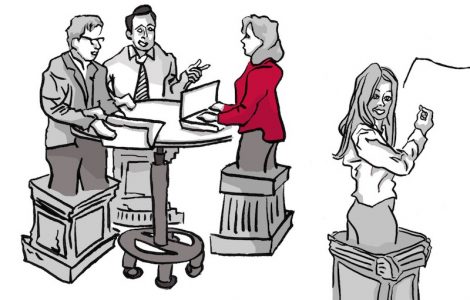 It is a commonly held belief that an individual’s personality is fairly well developed by the end of the adolescence, if not set in stone. Some even believe that genetic factors essentially account for the shape of the human personality (Weber, 2014). Before we dig deeper into this discussion, let’s first have a look at the concept of “personality”.

In contrast to states, which describe current conditions, the term “personality trait” refers to enduring personal characteristics that are revealed in a particular pattern of behaviour in a variety of situations (Barenbaum & Winter, 2008). Well known in psychology are the Big Five personality (McCrae & Costa, 2008) traits, a theoretical construct, which describes human personality as organized along five dimensions. These five factors are openness, conscientiousness, extraversion, agreeableness, and neuroticism. Instead of looking at each trait individually, personality needs to be conceptualized as an interrelated system of several traits. This leads us to the concept of “personality types”. Personality types can be derived by grouping individuals with similar values on several personality traits together into one personality type.

When reading such definitions one might get the impression that the concept of personality focuses on the temporal stability of interindividual characteristics. As a matter of fact, the existence of changes in personality has been generally acknowledged within the research community. The problem though is, there is still debate concerning whether and where there is a point in life beyond which personality remains comparatively stable.

Many psychologists believe that personality has a tendency to further stabilize itself over the course of life. Surprisingly though, recent research by Specht, Egloff, and Schmukle (2011) as well as Specht, Luhmann, and Geiser (2014) revealed that change in personality types might actually increase in old age.

Specht and her colleagues analyzed the consistency of personality types, i.e. the configuration of the Big Five personality traits, across adulthood and old age using large representative samples. The data used in both studies came largely from the Socio-Economic Panel (SOEP) study, a large and ongoing longitudinal survey of private households and persons conducted by the German Institute for Economic Research since 1984. Participants who met the criteria for study inclusion in 2005 and 2009 responded in either annual face-to-face-interviews or to questionnaires via mail (N > 14.000; 16 – 82 years).

The rationale behind her research has been that the vast majority of studies analyzing personality types have focused on childhood, adolescence, and early adulthood. In this period of life, individuals tend to mature such that the number of resilients increases and the number of over- and undercontrollers decreases with age. Studies that have analyzed personality types in individuals aged 30 or older are scarce, though.

Specht et al were not able to identify a specific age at which all personality traits reach their peak of stability; it seems more like there is change throughout the entire life course. What they found is that individuals change considerably after age 30, in some cases even more strongly than before. Especially the undercontrollers mature into more resilient personalities. Interestingly enough, during the phase of the middle adulthood, i.e. where many expect the midlife crisis to take place, the personality remains rather stable. The big surprise comes in the old age. Here, the researchers were able to reveal that up to 25% of the subjects being 70 and older changed their personality type: “In contrast to young adults, changes in personality of the elderly do not follow any typical pattern of maturity,” says Specht (Weber, 2014). Some become more resilient, others turn into under- or overcontrollers.

Why do these changes occur, and what are the major causes underlying these processes?

According to Neyer and Asendorpf (2001), there have been two main ways of thinking: The essentialist perspective focused on genetic factors, and the contextualist perspective focused on environmental factors. More recently, those two extremes have been combined, which means that change is regarded as being due not only to intrinsic maturation but also to social demands and experiences. Nevertheless, the concrete psychological and behavioral mechanisms that contribute to change in personality are still not fully understood.

Given the popularity of personality inventories such as the Big Five as predictors of future performance outcomes the aspect of changeability cannot be overstated. As with all types of assessment, a holistic approach as well as a sensible interpretation and use of the data obtained seems warranted.

Specht, J., Egloff, B. & Schmukle, S. C. (2011). Stability and change of personality across the life course: The impact of age and major life events on mean-level and rank-order stability of the Big Five. Journal of Personality and Social Psychology, 101, 862-882.