Narcissists are (not) the better leaders 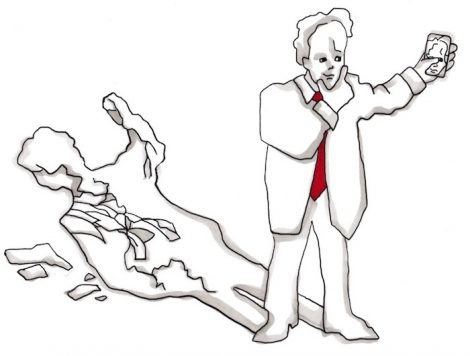 They have a bad reputation: narcissists. Not only since Freud, they tend to be emotionally isolated, highly suspicious, and are driven by the thought of others admiring them. If they accomplish their goals, their need to feel extraordinary is satisfied. On the other hand, if they feel threatened on their way to succeed, they can reach a state in which they are blinded by rage within seconds (Maccoby, 2000).

We meet narcissists at our workplace every now and then. Especially people in leadership positions are considered to have a tendency of inheriting narcissistic personality traits. Consistent with this stereotype is a quote from a member of the top management of Oracle about his CEO Larry Ellison: “The Difference Between God and Larry Ellison: God Doesn’t Think He’s Larry Ellison.“ (Wilson, 2003). Research has found evidence that the typical narcissist is happier, more self-confident, and less anxious compared to the average person. Simultaneously, he is also more likely to have a negative impact on the organisation, its culture and employees and, therefore, on the productivity and performance, of the organisation in general (Campbell et al., 2004; Higgs, 2009).

This line of thought raises the following question: is narcissism solely bad and possibly a threat for the organisation? Certainly not! Narcissism can be very useful and might even turn out to be a necessity for the good of the company. Why? Because the term narcissism can cover a variety of meaning: Recent research has started to differentiate between productive and destructive narcissism (Maccoby, 2000).

Leaders like Steve Jobs or Jack Welch are good examples of productive narcissists. They are talented and creative visionaries who always see the big picture. In a world where continuous change takes place, they reach their full potential because they actively seek and approach challenges and take the “right” risks. Especially in times of transformation and change is the need for a productive narcissist the biggest. They have the courage to lead the company through the transformation process with their charm and eloquence (Higgs, 2009).
Nevertheless, the ever-present threat that narcissism can turn into unproductive and destructive actions remains. Situations, where narcissists become dreamers who chase unreachable and unrealistic goals and, subsequently, attribute their failure to external factors or certain enemies, should be approached with caution. Under these circumstances the narcissistic leadership style is likely to change into a destructive one. Research has not been able to answer the question yet, where the line between the two different kinds of narcissism should be drawn (Higgs, 2009). Thus, magnificence, megalomania, and suspicion are characteristics that continue to be associated with narcissists.

Even though some of them have brilliant minds, these characteristics result in the stereotype of narcissists being selfish, unpredictable and, in extreme cases, paranoid (Maccoby, 2000).

What are the lessons learned of the recently provided information? Narcissists need colleagues who support them to go beyond their social isolation and suspicious attitude. By developing a relationship with their co-workers they get the opportunity to open up to other persons and learn to trust. Ideally, the colleagues are able to elicit the courage of their narcissistic leaders to break free from the social isolation through empathy, loyalty, and acknowledgement of their performances. If this happens the narcissists welcome constructive and goal-oriented criticism. In order to accomplish this objective one needs time, patience, and trust because it is a challenge to get close to narcissists due to their independence and self-protection. Given the situation that a narcissistic leader overcomes these obstacles, he or she is able to lead the organisation with great success.