Mission Impossible? How Change Agents (do not) really motivate others 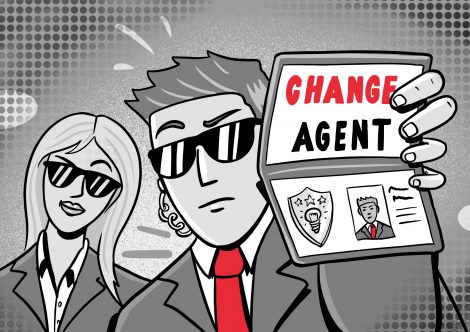 Many change projects fail. The reasons for this can be various: inadequate communication of the vision and the need for change, for example, or emotional resistance and fear of the unknown. Change agents can help to prevent this.

It is widely known that change processes fail far too often or do not achieve the desired sustainable changes. Too often, it seems that employees cannot really be convinced of the new ideas and motivated to implement new ways of working or processes. The reasons for this can be diverse: inadequate communication of the vision and the need for change, for example, or emotional resistance and fear of the unknown.

Change agents can help to prevent this. They are often involved in large strategic transformation processes to inform employees in addition to the official communication, to exchange with them, to convince them of the need for change and to identify resistance at an early stage.

All those who initiate, support or implement change

The term “change agents” includes all persons who initiate, support or implement change (Kanter, Stein & Jick, 1992). In classical change management teaching, this often refers to external or internal consultants who act as experts and promoters. (e.g. Howell et a., 2005). More and more often, however, leaders are also explicitly referred to as change agents and it is understood as an original responsibility of the leadership role to be promoters of change and to drive it forward in their teams. Also, in many change processes, so-called multipliers are used, for example employee representatives from different areas of the organization, who in turn act as change agents by being role models for change and by supporting others.

It has been proven that the involvement of change agents is a key factor in promoting the willingness to change and the motivation of employees (p. 38, Ford, Ford & D’Amelio, 2008). However, little is yet known about the group dynamic processes related to this. Why is it sometimes easy to get an entire organization excited about change through change agents, while in other cases resistance is stubbornly maintained and frustration and pessimism are more likely to spread via the office grapevine?

Analysis of the communication behavior

A new study by Endrejat, Meinecke and Kauffeld (2020) is now dedicated to precisely this question. In two independent studies, the researchers investigated the communication behavior of change agents and their “recipients” using an “observational approach”, which means that on the one hand they evaluated recorded conversations between change agents and recipients, and on the other hand only statements made by recipients in order to understand communication processes. They analyzed how change agents and participants interact with each other and what effects this had on the willingness to change as well as on the actual behavior of the participants.

In two scenarios, Change Agents either gave an interactive training/workshop or gave a presentation on “reducing procrastination” and “enhancing energy-saving behaviors” – two topics that require very different types of behavioral change by participants. During the experiments, all discussions between change agents and participants were recorded.

Afterwards, the statements of Change Agents were differentiated into:

The statements of the recipients were also divided into different categories, namely

• so-called “Change Talk”, i.e. positive statements symbolizing willingness to change (for example “I tried XX for the first time and it worked out quite well”)
• “Sustain Talk”, messages that maintain the old (for example “The new behavior XX is so complicated, I don’t even know where to start”)
• neutral reactions

Create awareness of the impact of your messages

What can we learn from this for the practical application and design of change processes?
The way in which change agents talk about (behavioral) changes influences the willingness of the recipient to change. So far so good. But how often do we actually concern ourselves with the communication behavior of our deployed Change Agents? Often these, once designated, are simply “sent off” into the organization.

The results of this study show us that it is definitely worthwhile investing time and training in the way change agents communicate and to create awareness among them for the impact of their own messages. What do they communicate? How solution-focused do they talk about new ideas? Where, perhaps unconsciously, do they tend to create resistance by focusing on potential problems and challenges with the best of intentions? There seems to be great potential hidden here, which has perhaps not been fully exploited so far.

Moreover, the process of motivational contagion can be used – a snowball effect in change, so to speak. Employees who, inspired by solution-focused messages from the change agents, speak positively about change, cause others to speak more and more positively about the upcoming change and their experiences with it. This means that organizations and change agents are well advised to create sufficient places and time for such conversations and discussions. Once again it is clear that communication, especially in change, is essential. Then maybe the rest will work out as well.