Competition does (not) always stimulate business 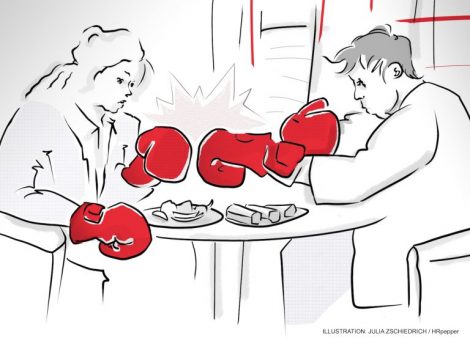 Whether it’s sports, politics or the economy: in many areas of life, competition and rivalry are considered to be invigorating. Imagine the German Bundesliga only consisted of one club, the German Federal Parliament of only one party, and there were only one enterprise in each economic sector. Most people would agree that such a limited degree of competition would not be ideal. But what happens when we focus on the inner life of organisations? What does research tell us about the correlation between corporate culture and corporate success? Or, in other words: does competition really always stimulate business?

Let’s start by defining the variables “organisational culture” and “corporate success”. Edgar Schein, Professor emeritus of Organisational Psychology and Management at the Massachusetts Institute of Technology (MIT), defines organisational culture as a “pattern of shared basic assumptions that the group learned as it solved its problems of external adaptation and internal integration, that has worked well enough to be considered valid and, therefore, to be taught to new members as the correct way you perceive, think, and feel in relation to those problems“ (Schein, 1985). According to Schein, the layers of invisible basic underlying assumptions, of partly visible espoused values, and of visible artefacts that need interpretation act together in an organisation.

With respect to corporate success, John Kotter and James Heskett take account of three parameters in their comprehensive study Corporate Culture and Performance (1992): revenue, stock price and net income. The two Havard professors analysed the development of more than 200 major enterprises in the U.S., spanning 22 industries over a period of 11 years. The examined organisations all belonged to one of two opposing cultural archetypes: a collaborative/enhancing or an adversarial/non-enhancing organisational culture.

More recent studies substantiate these findings and demonstrate how “unhealthy” cultures make the road to sustainable and successful management more cumbersome, even beyond financial figures. For their research, Corporate Culture: Evidence from the Field, John Graham, Campbell Harvey, Jilian Popadak and Shivaram Rajgopal (2017) interviewed 1.800 CEOs and CFOs about the importance of culture in their organisations. The four researchers from Duke University and Columbia University found that 79% of the interviewees considered culture to figure among the five main value drivers for their companies. Speaking of competition: 54% of the top executives would not acquire another company if there was no cultural fit between daughter and mother company. 85% of the CEOs and CFOs believe that an ineffective culture increases the risk of employees behaving unethically or even illegally (Graham, Harvey, Popadak, & Rajgopal, 2017).

Does that make culture the ultimate lever to improve a company’s results and to establish a heathly and solution-oriented competitiveness? There is at least one important restriction concerning this assumption. Clayton Christensen (2006), a professor at Harvard Business School, points out the phenomenon of “cultural rigidity”. Simply put, this would have the following implications:

1. Based on the experiences of employees in an organisation, certain approaches to problem solving are shaped.

2. These sample solutions are spread as best practices and, if successful, develop into a more and more subconscious and extensively applied organisational culture.

3. This culture helps the organisation become (moderately to exceptionally) successful for a given period of time.

4. After a while, the phenomenon of cultural rigidity sets in: fundamental assumptions, standards and artefatcs are handed down and are no longer scrutinized or further developed, resulting in missed opportunities for innovation.

In summary, a corporate culture aiming for strong and constructive collaboration and healthy competition is a valuable asset for any organisation. It helps making organisations considerably more successful regarding important financial key figures. Research shows that collaborative organisations outperform adversarial ones by a wide margin, because fierce internal competition does not set companies up for success on the external market. Nevertheless, even organisations with a distinct and effective sense of togetherness should beware of cultural rigidity. Otherwise they run the risk of reversing their own formula for success into its opposite due to a more and more rapidly changing environment.