It´s (not) easy to provide and take feedback 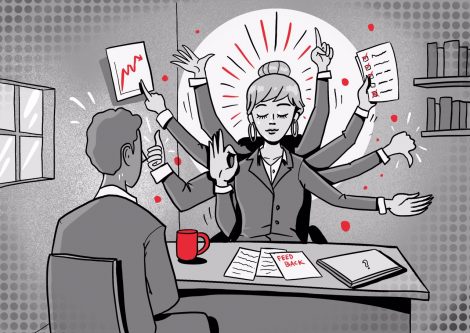 Over the last 30 years much research and writing has been done on feedback in organisations. Nowadays the term is sometimes used in an inflationary way: Everyone must give and take feedback all the time. The relevance of feedback for organisations is undisputed, but certain factors must be taken into account in order to achieve positive effects.

Feedback plays a central role in organisations and influences how they work. Companies like Amazon, Apple or Netflix attribute part of their success to their direct feedback culture. McKinsey sees constant feedback as a driving force to attract and promote the best minds (Forbes, 2020). The fact that feedback can also be perceived negatively by employees was recently demonstrated by the example of Zalando. Whether justified or not, the company hit the headlines with its comprehensive feedback software (Gründerszene, 2019).

Last year, the Harvard Business Manager published an issue entitled “Why Feedback Fails” and questioned the underlying hypotheses on how feedback works and its benefits (Harvard Business Review, 2019) – a thoroughly polarizing article.

Research on feedback has mostly focused on the question of how people improve through feedback in an organisational context (Baker, Perreault, Reid & Blanchard, 2013). Following on from the “feedback debate”, the following questions will be examined: What is feedback and why is it so important? What is its purpose? What are important insights for organisations from research?

Feedback ensures the viability of organizations

The term feedback originally comes from the field of cybernetics and refers to feedback on the efficiency of a service provided. The social sciences have applied the concept to human behaviour, and so social psychology understands feedback as the concrete and behaviour-oriented feedback on the basis of which a person is able to better assess and change the effect and consequences of his or her own behaviour (Online Lexicon of Psychology and Education, 2020).

From a systemic point of view, feedback is understood as a corrective that ensures survival. Since organisations can also be seen as systems, they need feedback mechanisms in order to survive in the long run (Jöns & Bungard, 2018). Organisations are therefore recommended to obtain different feedback perspectives (for example from business partners, suppliers, employees or customers), however, this text focuses on feedback between people within an organisation.

Trust is a key prerequisite

Trust is an important basis for ensuring that feedback has a positive effect on employee performance. Organisations and especially managers must succeed in creating an environment in which trust is a core value. Furthermore, the effectiveness of feedback can be increased by managers outlining the importance of feedback by relating it to the person and the task and looking at it in the context of organisational goals (Baker et. al., 2013).

Research results have also shown that performance improvement is higher among employees if feedback is followed by reflection, i.e. an in-depth examination of the feedback (Anseel, Lievens & Schollaert, 2009).

The concept of “feedback orientation” deals with the receptivity of people to feedback, which manifests itself in seeking, receiving, interpreting and using feedback. It has been shown that employees are particularly receptive to feedback and development when managers create a supportive environment. In this context, it seems to be of special importance that managers are accessible, encourage their employees to get feedback and give valuable, comprehensible and qualitatively good feedback themselves. Furthermore, the emotional intelligence of a person also seems to favour “feedback orientation” (Dahling, Chau, & O’Malley 2012).

Which criteria should good feedback meet?

The question now is what defines good feedback and which factors in particular need to be taken into account. One approach to giving feedback can be the orientation towards self-determination theory, which comes from personality theory and has its origin in humanistic psychology. It assumes that every person has a need for competence, social integration and autonomy. If these needs are satisfied, people can develop their full potential and thrive (Chiniara & Bentein, 2014). Feedback and also feedback processes should be designed in such a way that the three needs are not endangered, but are taken into account. For example, by not questioning the competence of an employee or by pointing out that a mistake does not automatically lead to dismissal.

Although there is a large number of recommendations, which are sometimes controversial, other key points can be highlighted: Feedback should be specific and well-founded, should not draw premature conclusions about personality traits and should not be formulated in a reproachful or generalised manner. A little more controversial is the question of the extent to which feedback should be attributed internally or externally. If feedback is attributed internally, which means. to the abilities and competences of a person, this can trigger an ego threat, which usually triggers demotivating and defensive reactions (Semmer & Jacobshagen, 2010) and thus does not lead to any improvement in performance. On the other hand, a purely external attribution of feedback can also lead to the fact that the corresponding feedback is not taken seriously and no change in behaviour results from it.

Feedback has become increasingly important in today’s world, which is characterized by complexity. Structures and frames of reference no longer exist in the form they did 30 years ago. In the future it will be important that organisations do not see feedback as a single intervention or measure. Instead, feedback in complex systems must be considered in an all-encompassing way and take place in a formal, informal, systematic and dialogue-oriented manner (Baker et. al., 2013).

There is now a wide range of tools available for this purpose, which are used by organisations. However, for performance management systems to be successful, it is important to link employee objectives to organizational goals, invest in the skills of leaders, and differentiate rewards for the extremes of performance (McKinsey, 2019). In addition to systems that reflect the requirements of the organizations, managers play a central role in this context. Despite self-organized structures, they still have the responsibility to provide feedback and enter into dialogue with their employees.