Innovation is (im)possible in home office 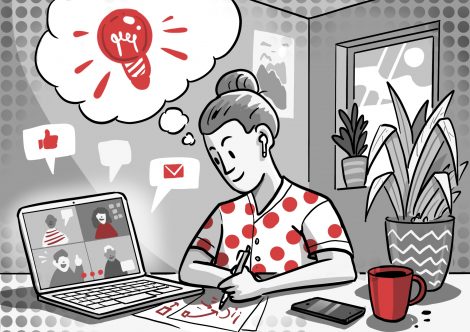 Home office has gained enormous importance during the Corona pandemic and has changed the daily working life of many people. While enabling remote work is becoming increasingly politically important, employers and researchers are frequently engaging with the questions of what effect the home office has on the performance delivered – and whether the home office inhibits innovation?

“Innovation is more than working from home. It has to do with people randomly coming together during the day to advance ideas they’ve just developed,” says Apple CEO Tim Cook. Numerous experts share this view. So, are innovation and home office mutually exclusive?

Home office impacts in Germany as an innovation hub

The Fraunhofer Institute for Industrial Engineering (IAO by its acronym in German) recently investigated the effects of home office on innovation in the German economy. It surveyed 328 medium-sized and large companies in the automotive, electrical engineering, chemicals, ICT and finance/insurance sectors. The survey determined the impact of the expansion of virtual collaboration on Germany as a hub for innovation. The results presented in the report can be summarized as follows: There is no specific restriction to innovation. Instead, innovation’s performance in the industries studied tended to develop positively overall, despite raising home office. Furthermore, the data used implies a positive effect of the most extensive digitization of communication in the development areas of companies on their innovation performance.

Doesn’t innovation require the physical presence of all participants and the direct exchange with the counterpart?

Researchers at the Universities of Hanover and Cologne have addressed these questions. As part of their experimental study, they mimicked the beginning of an innovation process in which the tasks of individual team members are highly interdependent. The study participants (n = 276) were divided into three groups. Performing the act of an idea generation, they were asked to represent concepts through illustrations collaboratively. For this purpose, they were presented on screens with a drawing box and construction set with drawing elements such as colored dots, different width knits, circles, and curves. Group 1 was in the same room, group 2 was connected via video call, and group 3 via chat. The innovative character of the resulting illustrations was evaluated based on the criteria of “uniqueness”, “usefulness” and “aesthetic value”. As a result, the creative and innovative performance was significantly lower in chat communication than in face-to-face communication, especially regarding the “usefulness” criterion. In contrast, no significant differences emerged between face-to-face communication within a room and exchanges via videoconferencing. These results are aligned with those of previous studies (Brosig, J. et al., 2003). Thus, chat communication seems to lack the variety of different aspects of communication (e.g., facial expressions and mimics), which is assumed for evolutionary reasons to be needed to cooperate effectively with each other.

What do these findings mean for companies in the day-to-day?

First, the awareness that innovation can also emerge in a virtual context – as long as suitable communication channels are chosen. While chat communication tends to have a negative impact on the innovation process, video conferences can replace face-to-face interaction.

The following recommendation is to expand digital communication infrastructure further. Moreover, the studies demonstrate that “pure virtual” communication is possible in several industries. Therefore, it is essential to develop rigorous communication media and formats into a hybrid model where analog and virtual work come together.

If, as German President Roman Herzog once said in his “Berlin Speech,” the ability to innovate decides our fate, the choice of the appropriate communication medium should be well-considered in times of digital collaboration and home office.