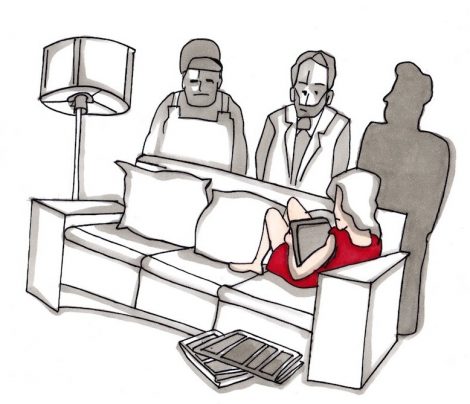 Politics are currently discussing the implementation of women’s quota regulated by law. Additionally, there is an intensive debate within the companies about raising the proportion of women in top management teams and the upper echelon (although it is not always reasonable; please, see BION published in February 2013). However, the gender distribution remains unequal among certain job areas. Some job areas are rather female-dominated, such as nurse and office manager, while other areas are clearly male-dominated, such as plumber and engineer. Due to the debate about equal opportunities and demographic change one calls for a more balanced gender distribution in these areas. However, employers suspect that women are not interested in certain disciplines, educational subjects, industries or hierarchical levels. But is this the only explanation? Given that German employers are still hiring the “female secretary to the board of directors” in job advertisements (Bauhoff & Schneider, 2013), the question arises whether gender-specific wording in job advertisements exists and how this kind of wording might influence the application behavior of women and men.

Recently, research in psychology examines these questions. For example, Gaucher, Friesen, and Kay (2011) conducted several experiments with young job seekers and students. The authors analyzed the terms and wording in more than 4,000 job advertisements and found a stronger masculine wording in male-dominated areas, whereas the wording was rather feminine in female-dominated areas. Masculine terms are categorized as, for example, “dominant”, “assertive”, and “confident”, whereas feminine terms are “understanding”, “support”, and “together”. In addition, the authors found that both women and men equally assume companies to employ a higher proportion of males if their job advertisement was worded in masculine terms.

Thus, previous research showed that gender-specific wording exists in job advertisements and this kind of wording has an influence on the application behavior of women. In a worst case scenario, well-fitting women do not apply for a specific job, even though they would be the ideal candidates. Especially, masculine wording in job advertisements has a negative influence on the self-selection of women. Thus, the starting point for the promotion of women and the increase of the proportion of women in male-dominated areas is not within the organization itself; it starts with the awareness of gender-specific wording in job advertisements.