Freedom at work is (un)finite 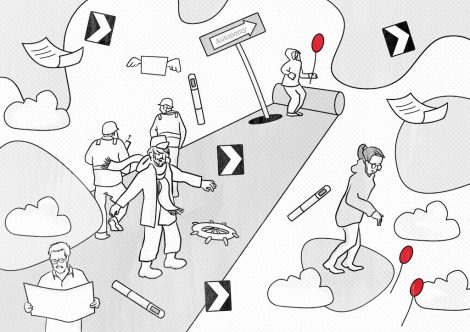 Working hours based on trust, responsibility, freedom of decision or participation: terms that are associated with a modern working environment and modern leadership. What does it mean for companies and their employees when these terms are applied in safety-oriented organizations?

For several years now, it has been observed that people demand the freedoms they have in their private lives and as part of a free and democratic society, also in the work context. Digitalization is increasingly breaking down the organizational structures that emerged in the industrial age and through Taylorist management principles and is intensifying the development towards more decentralization and design possibilities for workspaces.

A study by Hays, the ZukunftsAllianz Arbeit & Gesellschaft e.V. (Future Alliance for Work & Society) (ZAAG) and the Gesellschaft für Wissensmanagement e.V. (Society for Knowledge Management) (GfWM) from 2016 reflects this development: 68% of those surveyed would like more freedom and sovereignty in their work. It is exciting that the respondents rated individual degrees of freedom such as autonomy and influence higher than structural freedoms such as flexible organizational structures.

But what exactly is freedom? By definition, freedom is the “state in which someone is free from certain personal or social ties or obligations that are perceived as compulsion or burden and no longer feels (restricted) in his decisions or the like” (Duden, 2018).

What freedom means in organizations, on the other hand, depends on the business model and the tasks of the employees, so that freedom cannot be developed and implemented equally.

But what are the reasons for creating freedom for employees? Since the 1980s, research has been aware of the positive effects of free space and decentralization in organizations: Conger & Kanungo (1988) or Spreitzer (1995) have been able to demonstrate, among other things, greater performance, a better sense of well-being and greater employee satisfaction as a result of more freedom.

More recent research has also shown positive effects: In a comparison of different forms of leadership, it was shown that shared leadership, i.e. the dispersion of responsibility in a team and the leaving decisions to employees, could increase employee productivity and ultimately company performance (Bruch, Färber & Block, 2018).

The sociologist Robert Karasek has shown with the Job Demands-Resources Model something that is also relevant for the discussion about freedom at work: High job demands coupled with a lack of room for maneuver or autonomy lead to an increased stress level and exhaustion. However, it could also be demonstrated that high work demands lead to less stress and exhaustion if employees were able to act autonomously, received feedback and had a good relationship with their managers (Bakker & Demerouti, 2007).

With regard to research on how innovations arise in an organizational context, it also becomes clear that participative and free workplaces are a prerequisite for this. In a survey, innovation is associated more strongly with freedom than with security (Hays et. al., 2016).

With all the positive effects, however, the question arises as to when freedom can also have negative effects. The study on forms of leadership cited above has shown that the laissez-faire leadership style has a negative impact on employee productivity as well as corporate and innovation performance. Laissez-faire means non-leading, in which managers take no responsibility and give no feedback to their employees (Bruch, Färber & Block, 2018). Employees who have a poor relationship with their managers and also received little feedback were more stressed and exhausted when work demands were high (Bakker & Demerouti, 2007).

Therefore, freedom without orientation, e.g. through feedback, does not lead to the desired positive effects, so that dealing with autonomy and degrees of freedom in organizations requires the appropriate framework conditions.

A central task of leadership is providing orientation, and this becomes more important with increasing degrees of freedom and autonomy. The challenge lies in aligning joint action with the strategy or vision and providing a frame of reference, e.g. through guidelines. In addition to leadership, it is important to create an appropriate culture and framework in which people can work autonomously. Managers play a supportive role here, placing trust in employees, creating meaning and intellectual stimulation. In addition to the aspects that can generally be assigned to transformational leadership, transactional components are also very important (e.g., Bass & Avolio, 1990; van Dierendock, 2011; Yulk, 2013).

There must be clarity about goals, distribution of tasks, processes and responsibilities. Employees need to know, for example, how decision-making processes work, when they can decide alone and when it makes sense and is necessary to involve a colleague or even the manager.

However, a high degree of freedom in shaping one’s own work also requires competence on the part of the employees: This includes self-management and decision-making competence, but also the ability to take responsibility for tasks and work results. The basic prerequisite for this is a fit between the job requirements and the skills and abilities of the employees so that they are not overstrained.

Although not every form of organization can provide employees with the same degree of freedom, it is worth giving people more autonomy and room for maneuver in their working environment. It is important to find out what degree of freedom is sensible for carrying out work-related tasks and how the appropriate framework conditions must be designed.