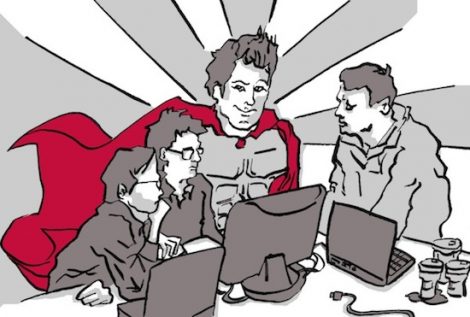 Nowadays there is a notable trend towards self-created job titles, particularly for the start-up industry. A Human Resources Manager is called a “Feel Good Manager“, Teachers are “Knowledge Navigators“ or a Software Engineer is labled an “Android Developer Hero“. However, the press classifies self-reflective job titles as fantastic, nonsensical and weird. (cf. manager-magazin.de, diepresse.com, wiwo.de). But is that really all of it?

A recently published research study by Grand, Berg and Cable (2014) provides another point of view (on charming self-created job titles). They analysed the change process within a non-profit human service organization, which aims to fulfil wishes of children with life-threatening medical conditions. As part of the change employees were asked to create a personalized job title (scientifically known as self-reflective) in addition to their official one. For instance, a PR Manager became the “Heralder of Happy News” and the COO “Minister of Dollars and Sense”.

Much to the researchers surprise, 85 % of the participants of this qualitative study mentioned that their self-reflective title helped them to cope with emotional exhaustion. They defuse stress by deploying attention to more meaningful and rewarding elements of their jobs. Therefore these titles were perceived as very important, perhaps more meaningful than their originally articulated ones.

Grant et al. (2014) explain this phenomenon as follows: job titles are part of our identity. They describe skills and power which people typically share first with their customers and colleagues. This positive effect relies on three significant mechanisms.

First of all, creative job titles reduce employees emotional exhausting through self-verification by expressing their identities in meaningful ways that are recognized and validated by others. Secondly, they enhance feelings of psychological safety by breaking down status barriers (Edmondson, 1999). Therefore employees feel more comfortable to speak out and and to take interpersonal risks. Thirdly, self-reflective titles facilitate interactions with people both in- and outside of the organization. All these mechanisms result in less perceived emotional exhausting.

Grant et al. (2014) validated these findings in a subsequent quasi-experimental study in the healthcare sector. After five weeks, Healthcare employees who created self-reflective titles felt less emotionally exhausted than their colleagues holding on to their professional titles. As in the previous study, the new and expressive job titles led to an increase in self-verification and psychology safety.

Obviously, the title “Android Developer Hero” carries more potential for identification than “Senior Software Engineer”. Hence, also more potential to prevent from emotional exhausting through down breaking of communication barriers and reinforcing of self-verification. Perhaps, this is not only a reason for smiling but also to think seriously about the integration of self-reflective job titles, which emphasise employees’ occupation and make them proud through identification. Or, as Janosch (2000) put it: What you call yourself, that’s who you are.