Success comes (not) from failure 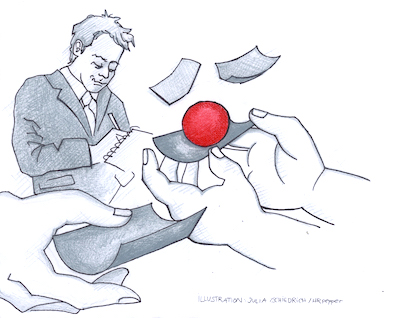 Companies tend to pride employees for being their most valued asset. Considering the fierce competition of globalized markets, companies are increasingly relying on such employees who go beyond their assigned responsibilities and take charge for initiating new ideas. Proactive entrepreneurial behavior in the sense of “a behavior syndrome resulting in an individual’s taking an active and self-starting approach to work and going beyond what is formally required in a given job” (Frese et al. 1996, p. 38) can yield improved processes, services, and products and hence a strengthening of a company’s competitive position in the marketplace.

A typical outcome of employees taking personal initiative is ideas. Especially radical or disruptive ideas can be of utmost worth for a company because of their potential for strategic renewal. According to Levinthal and March (1993), radical ideas are exploratory in nature, meaning that they are different from previous initiatives and can typically be regarded as a fairly challenging task for the idea generator that requires great commitment. Baer (2012) points out that because of the uncertainty of their success, it is difficult to estimate ahead of time the concrete value of radical ideas, which they might bring to the organization.

This poses two specific problems for companies: firstly, typically only a tiny few of the proposed ideas are good enough or even feasible so that they are green lighted by management and receive funding for further exploration. However, how do employees react if their ideas, which they voluntarily developed, i.e. in their spare time, get rejected? Will they stay committed to develop new ideas or will they be frustrated and stop proposing new ideas? The latter would severely hamper a company’s innovativeness because the innovation pipeline fueled by personal initiatives would soon dry out. Secondly, considering that radical ideas can hardly be compared with earlier initiatives, how can knowledge gained from prior initiative taking best be leveraged for the development of new ideas resulting in a continuous quality improvement of new ideas? This second issue is equally important if a company wants to avoid allocating too many of its scarce resources to low-quality initiatives.

A recent study by Deichmann and van den Ende (2014) from the Rotterdam School of Management researched these questions by investigating “how prior initiative outcomes relate to subsequent initiative taking and subsequent initiative success” (p. 670-671). With their focus on examining sustained, radical and personal initiative taking they also “directly address learning behavior for nonrequired activities” (p. 684) by differentiating between proactive behaviors and required, job-related tasks of employees. For their study they analyzed the “idea suggestion system of a multinational firm with archived data spanning 1,792 ideas suggested over the course of 12 years by 908 employees” (p. 671).

Contrary to their hypothesizing they found out that the rejection of an initiative by management, which can be considered a failure, is positively associated with repeat initiative taking by the proposing employee. In other words, it was the initiator’s experience of being rejected that stimulated his or her future initiation of new ideas. From a company perspective this means that not accepting the majority of initiatives did not have a negative impact on the pipeline of personal initiatives of their employees.

How can these surprising findings be explained? The researchers point towards the difference between intrinsic versus extrinsic motivation and the issue of resilience. For proactive activities such as taking the personal initiative to develop radical ideas intrinsic motivation is of utmost importance. Compared to successful idea initiators who might be busy implementing their green-lighted proposal and who have accomplished certain learning goals, failed employees might still feel challenged to seek new risk, experiment further, and come up with new proposals. The researchers comment that “we found that employees in our sample have a very high resilience when it comes to dealing with failure” (p. 683). Based on their own analysis as well as referencing entrepreneurship literature, researchers caution though “that when the number of prior failures is too high, people might feel less challenged and less motivated to initiate another idea” (p. 683).

A second explanation relates more to the organization the individual operates in and how it facilitates learning. Given a culture that does not punish failures but has a positive attitude towards errors (as it was the case with the researcher’s sample), employees might experience that it is safe to voluntarily take personal initiative even if they fail and that they don’t have to fear serious consequences. Because of such lower expectations, prior initiative failure might even decrease the threshold to take initiative again. The researchers suggest that this might be “because the outcomes of an initiative are not visible to a broader audience, which reduces the need to cope with negative cognitive demands and the fear of trying again” (p. 683).

From a practical point of view, the findings seem to indicate a positive effect from including previously successful contributors in new personal initiatives of their colleagues, for example as mentors who guide less experienced inventors and share lessons learned, to increase an initiative’s chances of success. More generally, the researchers point to the importance of social network size as a catalyst for collaborative learning and knowledge exchange and identify a potentially promising innovation strategy for companies. For example, through the use of mentorship programs that assign previously successful initiators to new initiators companies could steer network building that could benefit both parties: for the new and less experienced initiators their successful colleagues could serve as role models; for the previously successful initiators the benefit might be that by being exposed to new ideas they could identify novel opportunities in their own and others’ knowledge pools.

Deichmann, D. and van den Ende, J. (2014), Rising from Failure and Learning from Success: The Role of Past Experience in Radical Initiative Taking, Organization Science 25(3), pp. 670–690.