E-Mails (do not) only cause stress and exhaustion 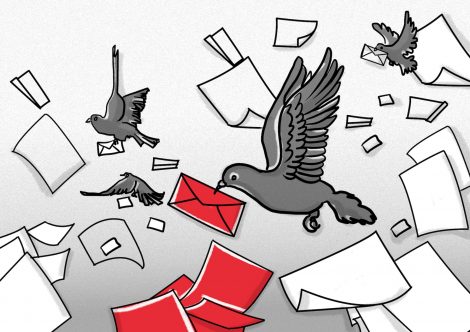 Today, when people are complaining about an increasingly stressful working day, they usually play a major role: e-mails. They have become the symbol of a working society in which people feel rushed. But answering to e-mails also have positive effects.

Who – like Tim Bendzko put it – “just has to check 148 mails”, will especially experience the difficulties between pre-Christmas days of reflectiveness and stressed task accomplishments during the Advent season. The steady increase of online messages in the business context is also perceived as disturbing, time consuming, and stressful. According to a forecast for the year 2017, each user receives 78 business mails per day (only legal mails, without spam) and sends 32 business mails per day (The Radicati Group, 2015).

It is no surprise, therefore, that the email has become a cultural “symbol for overload” (Barley et al., 2011). However, is the perceived interruption and the responsiveness to online messages only associated with increased time pressure and stress? Or could responsiveness to business mails possibly predict state positive affect?

Sabine Sonnentag and colleagues from the University of Mannheim and the University of Mainz examined these questions based on a daily survey (one week) and about 200 employees (Sonnentag et al., 2017). Emails are an interruption of the current activity, provided that they are perceived by the recipient. At the same time, there is an unspoken agreement between sender and recipient to respond to an email within a given period of time. This time period between sending an email by the sender and the response email by the recipient is also called latency. If this latency is short, the recipient demonstrates a higher responsiveness towards the content of the email as well as towards the sender. An immediate response to an email, therefore, will interrupt the current activity and increase the subjective time pressure for this unaccomplished tasks. At the same time, a low latency is associated with a higher subjective task accomplishment because this person has directed its awareness towards this new task and, in turn, accomplished this new task by being responsive to the email.
Hence, interruptions by emails have two different influences. On the one hand, results show that interruptions increase time pressure of the participants, which in turn has the well-known influence on the state negative affect at the end of the working day, such as distressed and upset. On the other hand, the same interruptions increase the responsiveness and, in turn, the task accomplishment, which in turn has a positive influence on state positive affect, such as active, interested, and excited (Sonnentag et al., 2017). These results indicate that interruptions through online messages do not necessarily induce stress and exhaustion, but can also give a positive feeling of “getting things done”.

The so-called email-insanity, therefore, is not only a symbol for overload, more importantly it might contribute to the subjective task accomplishment and work satisfaction than assumed in previous research. Nevertheless, it might be possible that a low latency in responding to emails might have a positive influence on the person itself as well as on the perception of the sender of the original mail, usually supervisors, colleagues, and customers in terms of higher task performance by the recipient. This might also positively influence customer satisfaction or team climate within the organization. However, this is a research avenue for future research.

In summary, emails are an important interruption of the current activity and, in fact, have negative consequences in terms of stress for the recipient, although these interruptions do not seem to compromise the positive feelings, such as interest and excitement.