Creative employees are (not) desirable 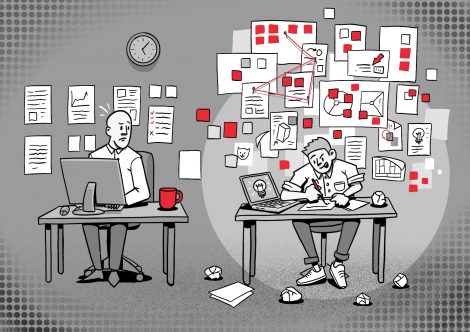 The review of current job advertisements makes it quite clear: Companies want and need creative employees. A look at current competency models also reveals: Creativity seems to be a highly desirable strength and those who do not have it will find many incentives to train it or at least to get the best out of themselves employing creativity-enhancing approaches such as design thinking.

Innovation research assumes that the innovation process itself is subject to risk, but the focus usually lies on the step of the concrete invention that mediates between the creative generation of ideas and the marketable innovation.

The core question is usually: How do we navigate the stormy sea of inventions to bring creative ideas safely to the port of profitable innovation?

What is rarely or never considered are the risks involved in the creative idea generation phase itself. Is it purely positive and always desirable to have employees and managers with high creativity on board or, if not, to get them on board?

Khessina, Goncalo, and Krause (2018) from the University of Illinois and the University College London have dealt with this question and state: it cannot be answered easily, because obvious opportunities are confronted with risks worth considering.

The state of “disinhibition” associated with creativity is particularly interesting, as some undesirable side effects accompany it. “Disinhibition” refers to a psychological state of disinhibition in which we (partially) give up our self-control. We abandon otherwise imposed adherence to rules, conformity, and risk avoidance and thus manage better to generate truly creative ideas and to express even seemingly absurd thoughts. According to the authors, this creativity-promoting effect also has a downside, because, in a state of disinhibition, we tend to break the rules, lie, steal and take risks. So far, however, the direct connection between creativity, disinhibition and the listed negative consequences has hardly been empirically investigated, which is why the mechanisms of action assumed in the qualitative meta-study by Khessina, Goncalo, and Krause are to be evaluated cautiously.

According to Khessina, Goncalo, and Kraus studies, that took a closer look at particularly creative individuals also identified a number of relationships that should not necessarily be regarded as desirable for companies: Creative people are much more likely to engage in open discussions with their colleagues. People, who consider themselves to be particularly creative, make significantly higher demands on their salaries and often demand special treatment within the company.

Another possible risk of creativity, which the authors discovered in their meta-study, is the risk that the best ideas, precisely because they are so creative and thus deviate from the status quo, will not be selected for follow-up out of fear of the additional work associated with the implementation. Mediocre creativity thus often has a higher chance of being implemented successfully. As a manager, there is even the risk of stopping one’s career with creative ideas. For example, Müller, Gonalo, and Kamdar (2011) were able to show that employees who presented a particularly creative idea were given fewer leadership qualities by a feedback board than those who proposed more conventional, practical solution ideas.

The assumption that creativity and creative minds have positive effects is also well documented and, interestingly enough, this is partly due to other side effects of the disinhibition described above. For example, working on creative tasks can be accompanied by a sense of relief and motivation. In a sophisticated experiment, Goncalo et al. (2015) showed that test subjects who were entrusted with a secret at the beginning of the investigation were subsequently so occupied with keeping the secret that they could find less motivation to comply with a request for support (apparently already after the end of the experiment). If, however, the test subjects had the opportunity to do a creative task before the request, they showed greater helpfulness and reported a feeling of relief – without betraying the secret. Interestingly, the sense of relief and the greater motivation could be completely explained by greater disinhibition of the creative workers. The supposed culprit had his good fortune here!

Further positive effects of creative work which are mentioned in the meta-study are among other things: The reduction of stereotypical thinking, higher openness in creative groups and a greater group cohesion and last but not least the possibility to come up with valuable new ideas, which are the first step in the innovation process and therefore indispensable for productive innovations.

Whether it is the right strategy for companies to bring more creative souls into the company or to promote creativity, or whether it is better to outsource the spinning of ideas, as is currently happening in many organizations through the spin-off of start-ups, can therefore not be answered clearly. However, it seems evident that it is important to not see through a rosy glow when dealing with creativity, but to carefully look at possible risks and side effects.