Why top executives don’t have to worry about charisma (sometimes) 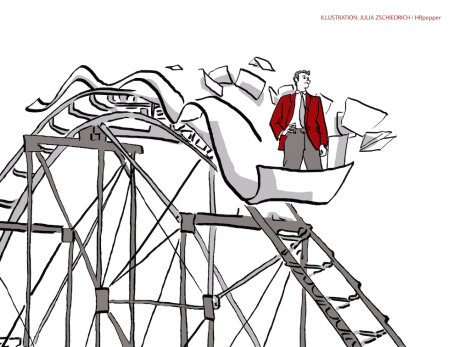 The scandals engulfing Volkswagen are just another case of top managers falling from the giddy heights of celebrity and public adulation. The higher they rise, the more positive respect they enjoy, the harder they fall. But what determines the positive public picture of many top executives? The great – personal and hierarchical – distance would suggest that the people observing them do not have enough information for an objective judgement. Which criteria do we use to judge our “leaders”, be it the managers of a company, the directors of an organization, or the president of a country?

A recent study by Jacquart and Antonakis (2015) has investigated just this question. The authors describe two (competing) processes by which managers are assessed. There is the attribution process, according to which managers are judged according to the performance of their organizations. The company’s success is attributed to the managers in charge, and the managers are seen positively, that is, they are considered successful. If the company has fallen on hard times, that information is again used – for a negative judgement of the managers. The same goes for politicians, whose quality is judged e.g. depending on the performance of their economies (e.g. Calder, 1977).

The opposite process works by inference: An executive is rated by the presence of certain traits of an ideal leader. People form their judgements depending on whether the managers they experience in real life matches the image in their minds of what the ideal prototype leader should be. Charisma is still considered an important trait, which can be expressed by building an effective image or by communicating a vision. This approach assumes that a leader’s charisma is what decides whether the judgement is positive or negative (e.g. Fiske, 1995).

Jacquart and Antonakis (2015) now assume that inference works when attribution becomes difficult: The degree to which charisma affects the judgement depends on how clear and how specific the information about the performance of the company is. If clear performance data is available, be it positive or negative, that data will be used when making a judgement about the managers in charge. If, however, the data is ambiguous or unclear, the judgement will rely on the presence of ideal-leader-qualities, such as charisma.

The researchers looked at the worlds of politics and business to test their hypothesis. Their first study took a historical look back at American presidential elections from 1916 to 2008. As assumed by the researchers, incumbent presidents and their parties were re-elected if the American economy performed clearly positively during their term in office. If the economy fared less well, the positions of power in Washington tended to fall to the other party. If, however, the economic indicators were not clear and left some room for interpretation, the judgement relied more on inference: The presidential candidates were then rated in terms of their charisma. The more charismatic a candidate, the more likely his (re-)election.

In the second study, the researchers conducted an experiment that simulated the reappointment of a CEO. They produced a fictional piece in a business show, changing the information about the CEO’s charisma and the clarity and availability of data about the company’s commercial performance. The participants of the experiment were shown different editions and then asked whether they would reappoint the company’s CEO. The study again confirmed the expected effect: Whenever the information about the company’s performance was clear – whether positive or negative – it was used to judge the CEO. When the information was ambiguous, the CEO was judged in terms of his alleged charisma.

Both processes, inference and attribution, play a role in how executives are perceived. Clear and straightforward information about the commercial performance of a company or national economy affects people’s perception of the quality of leadership. Ambiguity, on the other hand, forces people to fall back on their assumed traits of the ideal prototype leader.

As long as companies are genuinely successful, top executives do not have to worry about whether they are charismatic or not. In leaner years, they would do well to draw attention to causes other than their management skills. When the mechanisms at work are less clear, the authors suggest the managers to foster a certain charisma. However, the people passing judgement would also do well to consider these studies and remember the processes that might be pushing them into rash and biased opinions.