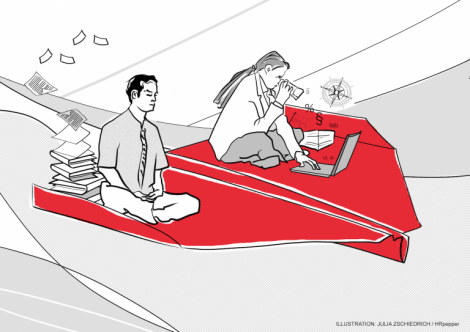 Due to higher pulsing of trends that are currently emerging in the working world the question arises what happens next after the present „wave of agility“? And yet the trigger for the high popularity of agile methods is not resolved: companies are still tremendously pressurized by the need of responding flexibly to customer demands and reacting rapidly to changing conditions (Peren, 2012). It is essential to make fast and good decisions despite the increasing volatility, uncertainty, complexity and ambiguity – the so-called VUCA-world. The number of options for decision-making has increased. With rising possibilities opportunity costs grow, which means the fictive costs of unused chances (Witzer, 2012). Even who decides correctly, can still miss a lot.

Simultaneously the risk of taking wrong decisions does not decrease. In addition, the half-life period of knowledge decreases massively (Sackett, 1996) along with the new phenomenon of “alternative facts” and faked statistics. The most recent edition of the ZEIT headlines this topic.

In summary, it is important to make the right decision from a position of maximal uncertainty, without losing sight of the opportunity costs of unused chances or the reduced half-life period of knowledge. The rabbit confronted with the snake gains potential for identification. So what can we do to not completely lose track?

In times of excessive demand, people often wish for simple answers and crash barriers to orientate themselves and to hand over some responsibility. „People often turn their back on science, because it does not provide any easy answers (…)“ (Hartung & Sentker, 2017). In day-to-day consulting business we are often encountered by a need for easy tools and checklists. But looking into science is worth it, as it offers fittingly contradicting answers.

On the one hand there is the well-know American decision-making researcher and Nobel prize winner Daniel Kahneman. In his bestseller „Thinking, Fast and Slow“, which he published in 2012, he recapitulates his decades of research in decision-making. Kahneman (2012) distinguishes two decision-making systems:

The impulsively, automatically and intuitively working system 1 and the analytically, consciously and rationally operating system 2, which demands greater efforts from us. According to Kahneman system 1 is more prone to error, but consumes less capacities and creates survival benefits, as it helps us to judge and act faster, by perceiving objects easier, as they really are.
Our brain is convenient. Overall it has the tendency to use system 1 and to simplify objects, this means to evaluate, without having enough information at hand. This often leads to false assessments and decisions according to Kahneman (2012).

What recommendations does Kahneman give to the overstrained decision-maker? Only those who review quick judgements critically, which are often caused by lazy shortcuts, come away with good decisions.

To what extent this answer helps the rabbit remains open. Eventually, the order of the day seems to be speed. Representatives from agile organisational environment claim, intuition is the relevant set piece, to remain capable of acting in a constantly changing world (Zeuch, 2017).

A second scientific point of view is from Gerd Gigerenzer, a renowned German decision-making researcher at Max Planck Institute for Human Development in Berlin. In his book „Risiko – wie man die richtigen Entscheidungen trifft (Gigerenzer, 2014) which was published in 2014, Gigerenzer ascribes the intuition of the world of error-prone esotericism and defends it vehemently. According to Gigerenzer, gut instincts and intuitive decisions are often based on subconsciously undertaken rules of thumb, which can be seen as a form of unconscious intelligence.

Gigerenzer criticizes Kahneman’s research regarding the lack of contextualization of decision-making situations. As stated by Gigerenzer, particularly in complex decision-making situations, system 1 undertakes better decisions. This is especially due to the limited capacities of the working memory. System 2 is limited by the working memory which, in complex situations, is sometimes not sufficient to process all relevant information. Gut decisions to some extent may be better, even if we can’t justify them, says Gigerenzer.

At the same time we witnessed thousands of people going out on the streets and marching for a scientific approach and fact-based decisions at the March for Science during the last weekend (Welt, N24, 22.04.17). This is due to the assumption that gut decisions of individuals carry a risk of lacking objectivity or comparability and thus offer great opportunities for abuse of power and manipulation.

So what conclusions can be drawn from this? Perhaps we must accept that the world is not quite as simple as we would sometimes like it to be.

In a scientific sense, the full spectrum of our decision-making tools shall be used. We should adduce data and facts and analyse extensively where possible, and at the same time we should train our ability to use our own intuition as an additional decision-making source. This applies particularly in uncertain or highly complex situations, in which the information available is limited or where quick decisions need to be taken.